Antoine Griezmann thinks he's already on par with the likes of Lionel Messi and Cristiano Ronaldo.

Ahead of the return of the Champions League, Griezmann was asked if he felt like he now sat at the top table alongside Messi and Ronaldo and the Atletico Madrid forward responded confidently.

"Yes, I think I am now perceived in that light," Griezmann answered.

Griezmann proved pivotal in France's World Cup win in July and was voted the Europa League's Player of the Season following Atletico's triumph in May so it's safe to say that he's hitting his prime.

The French forward was snubbed by Fifa in their list of the top three players in the world but Griezmann insists that his achievements will be recognised in the upcoming Ballon d'Or ceremony.

But Griezmann's assertion that he is now on the level of Ronaldo and Messi hasn't sat well with Real Madrid defender Sergio Ramos. 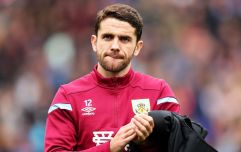 Can you name every English football club that begins with 'B'?

END_OF_DOCUMENT_TOKEN_TO_BE_REPLACED

Speaking to AS ahead of Real's Champions League group opener against Roma, Ramos gave his take on Griezmann's claim.

"Good question. Ignorance can be brash," Ramos said. "When I hear this guy speak, it reminds me of players such as Totti, Raúl, Buffon, Casillas, Maldini, Xavi or Iniesta, players who have won many awards and titles but never a Ballón d'Or.

"Everyone has freedom of speech but he should listen to the likes of Simeone, Godín or Koke, people with decent principles as it would serve him well. Having said that I do feel he is a great player."