After witnessing Scott McTominay and Fred struggle to get to grips with Brighton - last season's ninth placed side - Erik ten Hag may be asking the Manchester United hierarchy to up their Frenkie de Jong offer.

The United midfielders had a poor showing in the club's Premier League opener, at Old Trafford. Fred was hooked after 52 minutes while McTominay was on a red card tightrope for over 50 minutes after an early booking, and was replaced with 13 minutes to go.

In his half-time and full-time analysis of United's 2-1 defeat to Brighton, Roy Keane was unforgiving of the misfiring midfielders. Others were criticised, but Keane reserved some of his toughest comments for McTominay and Fred.

Hot take: Harry Maguire is not having a good game

Fred is not having a good game

McTominay is not having a good game

If only United could have foreseen these issues at some point over the previous 2 seasons. Sadly there was just no way to know 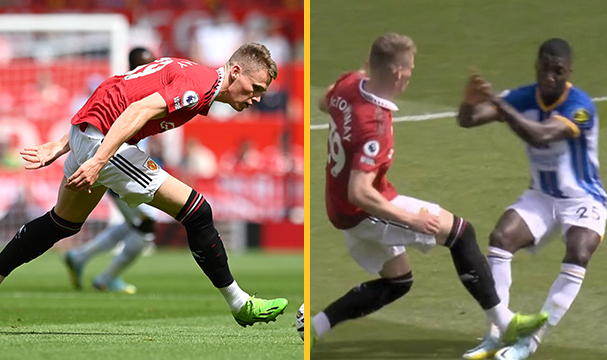 END_OF_DOCUMENT_TOKEN_TO_BE_REPLACED

A number of people on social media believed McTominay should have been sent off for a late challenge on Brighton and Hove Albion's Moisés Caicedo.

The Scotland international took a heavy touch, which allowed Caicedo to close him down in the centre of the pitch. However, as McTominay attempted to win the ball back, he was late with his tackle and caught his opponent on the ankle.

Fans on social media were quick to suggest that the 25-year-old should have been shown a red card for the tackle, rather than a yellow.

The 31-year-old slotted home from close range after some good work on the left side. McTominay had been caught in possession, in the centre circle, to spark the Brighton counter-attack.

The away side double their lead in the 39th minute, with Gross grabbing his second of the game. United goalkeeper David De Gea parried a shot straight into the path of the Brighton man, who calmly converted.

United grabbed a goal back from a corner kick, but Brighton did enough to close out the game and record their first ever league win at Old Trafford. During the half-time break, with United trailing 2-0, Keane criticised his former side, and highlighted the failings of Fred and Scott McTominay.

"We shouldn't be that surprised," he added. "There are changes in the team, and personalities, and a new manager but he will need more time.

"But I go back to the personalities in the team, and the two in the middle of the park - all over the place. You could see it for the goals - gaps everywhere... out of possession, I think Man United are as poor as any team in the Premier League."

"All over the place"

Roy Keane gives his take on the first half 🔊 pic.twitter.com/bpP33YvpvO

"They won't get United back to the top"

After the full-time whistle sounded, Keane commented, "Football intelligence, I've been on about it for a long time - Fred and McTominay, they won't get United back to the top."

It is not the first time that Roy Keane has been critical of Scott McTominay and Fred. Last season, after a 4-1 defeat to Manchester City, the Cork native suggested the pair were two of six players not cut out for a place in United's starting XI.

"Just look at Fred... he's standing there like he's waiting for a bus," Keane exclaimed, when analysing a City goal. "Your instinct should be to run back and fight for everything. He's just stood there.

Right now, it is looking like a new season and the same midfield problems for United. Frenkie de Jong may get his Barcelona wages paid by United, yet.