With Borussia Dortmund sitting bottom of the Bundesliga after losing eight of their opening 13 games, their arch-rivals Schalke 04 decided to hell with sportsmanship and dig the boot in.

Their official twitter page posted a tweet highlighting Dortmund's plight, but the actions of what was probably an over-excited intern were quickly erased when a more right-thinking member of staff deleted the tweet.

However, as they're likely to do, the Twitterati screen-grabbed in their droves to ensure the offending tweet didn't go away. 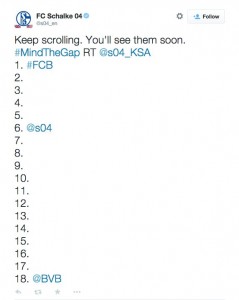 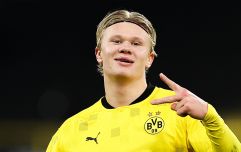 END_OF_DOCUMENT_TOKEN_TO_BE_REPLACED

What's most puzzling about the tweet is the fact that Schalke don't really have a lot to brag about, sitting sixth in the table, on their second manager of the season, and took a 5-0 pasting from Chelsea only last week to leave their Champions League fate out of their hands.

Granted, it's better than being bottom of the table, but it's not exactly a season you want to be shouting about from the rooftops.