AC Milan and Inter Milan have shared the stadium since 1947

It's one of the most iconic stadiums in world football, yet Milan's San Siro could be heading for demolition.

The two clubs that call the Giuseppe Meazza Stadium home - AC Milan and Inter Milan - are both reportedly keen on moving to a new ground, to be constructed just a matter of yards away, meaning it's increasingly likely that the famous old stadium will be torn down to make space.

La Gazzetta dello Sport reports that Milan have been interested in making the move for a while, with Inter now said to be on board with the idea.

Plans for a new 60,000 capacity home must be submitted to the Municipality of Milan for approval by the end of April, though this could happen as soon as next week. Should they be formally approved by local authorities, construction work could be complete by the beginning of the 2022/23 season. 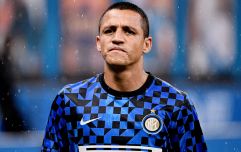 END_OF_DOCUMENT_TOKEN_TO_BE_REPLACED

The new stadium is said to be based on New York's Metlife Stadium, home to the NFL franchises, New York Giants and New York Jets. A 5,000-seater venue for concerts and a shopping complex will be built alongside the new stadium, which will be jointly funded by both Milan clubs. It's also expected that they will share any money raised through naming rights.

The two Serie A giants have shared the stadium since 1947, when Inter moved in. Milan, however, have called it home for an extra 21 years, playing their first game there in 1926.

The San Siro hosted games at both the 1934 and 1990 World Cups, receiving a huge revamp ahead of the 1990 tournament. It has also staged two Champions League finals - Bayern Munich's win over Valencia in 2001 and Real Madrid's 2016 success over Atletico Madrid.


popular
The SportsJOE 12 o'clock quiz | Day 135
It was Pierre-Emerick Aubameyang's final but Emiliano Martinez's moment
The SportsJOE 12 o'clock quiz | Day 134
"I was around the place like a Jack Russell, snapping at all the big guys"
"Me and him used to room together, and he was a bit of a nightmare"
"It's not about winning at underage. It's about building players and building people"
The SportsJOE 12 o'clock quiz | Day 133
You may also like
11 months ago
All hail Alexis Sanchez - the super-fraud who played Manchester United like a piano
11 months ago
Lukaku: Pogba, Alexis and I always got the blame at United
11 months ago
Neville: Lukaku's lack of professionalism is contagious
11 months ago
Report: Romelu Lukaku reaches deal to leave United
1 year ago
Report: Manchester United offered Radja Nainggolan in swap deal
1 year ago
Manchester United refuse Mauro Icardi swap deal
Next Page