Sam Allardyce has hit out at the government for interfering in football, as footballers were told to stop hugging during celebrations or risk the game being stopped in the United Kingdom.

Recent weeks has seen under-fire government ministers turn their focus to football and particularly the act of celebrations, with the government's sports minister saying there is "no exception" for football with regards to Covid-19 guidelines.

END_OF_DOCUMENT_TOKEN_TO_BE_REPLACED

"Everyone in the country has had to change the way they interact with people and ways of working," Sports Minister Nigel Huddleston tweeted on Wednesday.

"Footballers are no exception. COVID secure guidelines exist for football. Footballers must follow them and football authorities enforce them — strictly."

Allardyce, who took over as West Brom manager last year following the sacking of Slaven Bilic, urged politicians to "look at their own house" before criticising football.

"We all want to carry on playing football, and if we all adhere to the rules and regulations slightly better than we already have we will," Allardyce said.

"But I get a little peeved with players called out for being irresponsible. Why the government want to intervene is an absolute nonsense with the mess they're making of it at the moment.

"Their care has not been the greatest and it's irresponsible the government wants to intervene in football, they need to look at their own house before they look at ours.

"We're getting tested two or three times a week, (we have) sterilisers, masks and independent monitors at the training ground making sure we don't do this or that.

END_OF_DOCUMENT_TOKEN_TO_BE_REPLACED

"I can't have meetings more than 10 in a room, so why are they thinking we are doing it wrong? Just because we're celebrating scoring a goal. Come on, that's not right."

Allardyce, who turned 66 in October and had earlier called for a circuit break of football, has admitted that while he is enjoying it to an extent, fears over contracting the virus have "numbed" his enjoyment of his task in attempting to keep the Baggies up.

"I'm enjoying it to a point," Allardyce said of his return to management. "When I came back I didn't have any worries regarding the safety of the football because how many protocols were in place and how safe the environment was.

"But that was before the variant virus hit this country and started spreading like wildfire. It has numbed my enjoyment of trying to help the club out of their problem because of my fear of catching Covid.

"Or worse still passing it on to my wife, that would be my greatest fear. I've still got my enthusiasm, but in the back of my mind I'm washing my hands, wearing my mask, telling the lads to keep as socially distanced as possible. 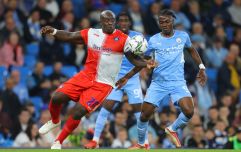 END_OF_DOCUMENT_TOKEN_TO_BE_REPLACED

"But until I get the vaccine I have to make sure I stay ultra-safe."

Increased government scrutiny on football comes during the week when the United Kingdom passed 100,000 coronavirus deaths. This week has also seen widespread criticism of the government for their lack of support for workers, after CCTV footage should Tube carriages packed with commuters, despite the UK recording the highest number of Covid-19 deaths to date this week.

On Wednesday the daily figure for recorded deaths was 1,564, the highest of the pandemic so far.


popular
Rob Kearney taught a classic GAA lesson when he tried to have the craic in second game back
The scenes in Newbridge as the biggest hit and hope ever knocks Moorefield out
Shane Lowry had no problem setting reporters straight at Ryder Cup briefing
How one text message a teammate sent Kieran McGeary proves that Tyrone's success was a team effort
Kieran McGeary on his relationship with Mickey Harte and his role in Tyrone's success this year
When Liam Brady lit into Brian Clough for his dismissive Mick McCarthy comments
"Mayo have been back and back and back all the time. That's some resilience, to do that." - McGeary bats for Mayo
You may also like
1 day ago
Cristiano Ronaldo reportedly rejected by Atletico before sealing Man United return
1 day ago
Lionel Messi has knee injury, Paris Saint-Germain confirm
1 day ago
David Beckham tells Inter Miami boss Phil Neville to be 'particularly hard' on son Romeo
1 day ago
Marcos Alonso stands by his decision not to take the knee before matches
1 day ago
Cristiano Ronaldo scammed out of six-figure sum after passing credit card pin to travel agent
3 days ago
Tottenham and England legend Jimmy Greaves dies aged 81
Next Page