"It was more of a nibble than a bite!"

France vs. Germany has served up some classics over the years, and this Euro 2020 group game had a bit of bite, courtesy of Antonio Rudiger.

The Chelsea defender was tangling with France midfielder Paul Pogba, late in the first half, when he inexplicably decided to have a wee chew.

END_OF_DOCUMENT_TOKEN_TO_BE_REPLACED

While this does not rank up there with Luis Suarez implanting his dentures on Giorgio Chiellini, at World Cup 2014, there was enough nip on Pogba's shoulder to make him yelp out.

Pogba ended up having a free against him for pulling Rudiger's arm in frustration. He was incredulous that the incident was not picked up.

It does beggar belief that the Germany star would have a snap at Pogba given the amount of TV cameras in the ground.

Over on ITV, pundits Patrick Vieira, Ian Wright and Roy Keane discussed the incident. While Wright said it was hard to clearly see what happened, Keane and Vieira were happy to weigh in.

PATRICK VIEIRA: "I don't know what he's done there. You've seen Pogba's reaction. It looked like a bite, so I don't really understand what he was trying to do there."

ROY KEANE: "I think it was more of a nibble than a bite, wasn't it though?! Yeah, it wasn't a proper bite, was it?" 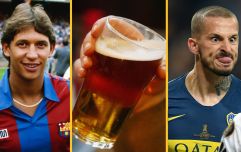 END_OF_DOCUMENT_TOKEN_TO_BE_REPLACED

Keane was less pleased with Rudiger's haphazard defending for the France move that led to their first half opener. Seven German players were all drawn to the ball but one sweeping Pogba pass opened them up, out on the left.

"For so many players to be in the wrong position from a throw-in, at this level, there's no excuse.

"Rudiger should be minding his own business. Why he's getting drawn into that [press] and chasing people... he's child-like, trying to chase the ball. Real poor goal."


popular
"I never really cried or got emotional over what I've done as an individual. I couldn't give a s***"
"I was off the grid" - Aidan O'Shea respond's to Mayo criticism after club championship win
"If I break my wrist, it's on f***ing both of you." - Koepka and Berger act the spoiled child
'I won The Open by six shots in my home country, but this was the best week of my golfing career'
The FootballJOE Pub Quiz: Week 7
Final Ryder Cup player ratings a tough read for some Team Europe big guns
Galway fans' frosty reception for Davy Fitz doesn't make any sense
You may also like
1 day ago
Borussia Dortmund CEO issues explicit response to Erling Haaland transfer suggestion
1 day ago
Graeme Souness hammers 'non-existent' Spurs midfield after humiliating derby defeat
1 day ago
Kylian Mbappe caught on camera complaining about Neymar
1 day ago
Bruno Fernandes responds to late penalty miss and makes bold vow
2 days ago
Player who scored own-goals to "stop match-fixing" charged... with match-fixing
2 days ago
Solskjaer claims Aston Villa winner was offside and takes aim at away side
Next Page