Phil Jones was haunted by Eden Hazard for the second time in two months.

The Manchester United defender brought Hazard down for Chelsea's match-winning FA Cup final, in May, and was at fault for the Belgian's goal in his side's 2-0 loss at the World Cup's 3rd place playoff.

Roy Keane slaughtered Tottenham defender Danny Rose, at half-time, after Belgium's opener and it was Jones' turn to get a dose of the Irishman's full-frontal analysis.

"They make the same mistakes every week; they're not going to change... Jones and Rose are just not good enough," Keane began.

"With the coaches they have, they're not going to change."

Gary Neville, who was also on punditry duty, attempted to defend Jones and said he had the potential to be as good as Barcelona and Spain's Gerard Pique if he was able to get a run of games together.

Neville then tried to reason that most defenders must live with the fact that they will make mistakes and not let it affect them. 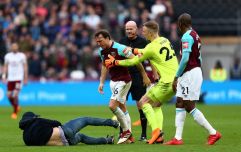 END_OF_DOCUMENT_TOKEN_TO_BE_REPLACED

"Each season you'll play 45 or 50 games, you're probably going to be at fault for around four goals. You're going to make mistakes but four goals... "

"He had good wingers in front of him, let me tell you."

Neville took the roasting well and Ian Wright loved not being the target this time.


popular
"When Sean Boylan was around, you didn’t need a psychologist or a counsellor - he did it all himself"
The SportsJOE 12 o'clock quiz | Day 136
The daily diet of Manchester United midfielder Jesse Lingard
The diet of a modern day rugby player compared with a top jockey
COMPETITION: Answer this survey for a chance to win a fabulous stay at the Trident Hotel in Kinsale
James Ryan's misfortune opens Leinster and Ireland doors for Ryan Baird
"It's not about winning at underage. It's about building players and building people"
You may also like
1 month ago
Sam Burgess on sport's most famous half-time interview and friendship with Russell Crowe
2 months ago
"F***ing hell, this guy is like James Bond. This is going to be amazing."
2 months ago
"Just to clarify, it was an accident" - Mike Brown on Conor Murray incident
2 months ago
Ben Youngs talks about Leicester Tigers' infamous Tuesday training sessions
2 months ago
Ireland's best try of the past five years wouldn't be allowed any more
4 months ago
Manu Tuilagi sees red as England clinch Triple Crown
Next Page