It is almost 30 years since Ireland went to Seville to take on a Spanish team that contained the likes of Fernando Hierro, José Mari Bakero, Andoni Zubizarreta and Emilio Butragueño. Roy Keane was playing centre midfield for Ireland, and his performance garnered lots of attention.

The Nottingham Forest midfielder was only 21 and just over a handful of Ireland appearances to his name. Dropped into a febrile atmosphere at Estadio Ramón Sánchez-Pizjuán, Keane had an outstanding game as Ireland shaded a tight, tense encounter.

END_OF_DOCUMENT_TOKEN_TO_BE_REPLACED

Keane and Chelsea midfielder Andy Townsend were in the centre for Ireland, that night, and their mix of tenacity and tidy passing saw them get under Spain's skin, and play through their lines.

Jack Charlton's side restricted to Spaniards to long-range shots that Packie Bonner was well behind. Niall Quinn missed a glorious chance to put Ireland ahead, in the first half, when played through one-on-one against Zubizarreta. His shot evaded the Barcelona goalkeeper but was wide of the target.

When Quinn played forward partner John Aldridge through on goal, early in the second half, Juan Manuel López took him down to prevent another one-on-one and was promptly red-carded. For the final half an hour, Ireland were on top but they could not find the winning goal. Aldridge did find the net but was deemed to have been offside [image below] after receiving a pass from Quinn, rounding Zubizarreta and slotting home. 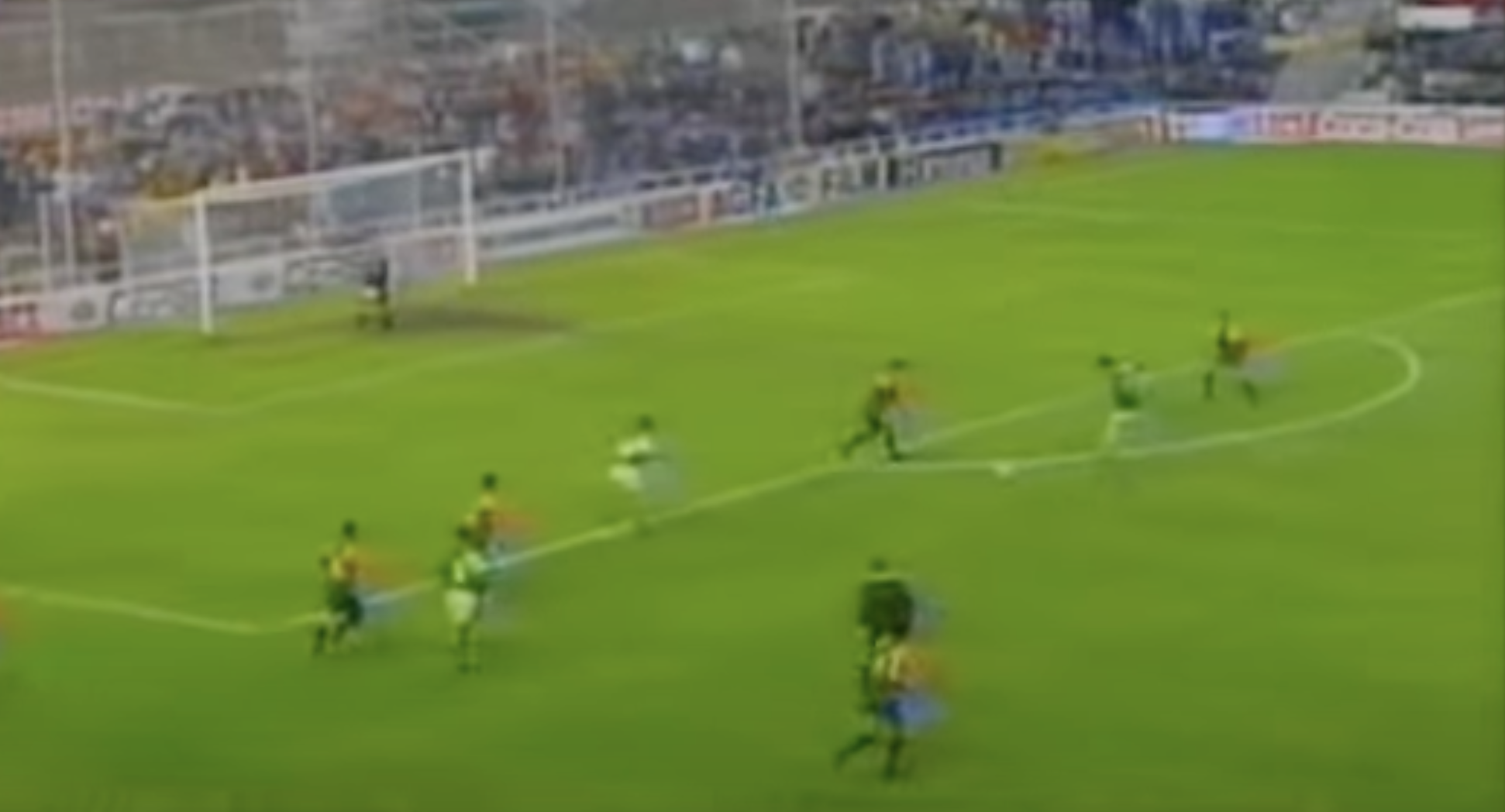 END_OF_DOCUMENT_TOKEN_TO_BE_REPLACED

For all of Ireland's second half dominance, a sliding José Mari Bakero missed a late chance to win it for the hosts. Ireland had travelled to Spain and left with a creditable draw, but it says a lot about their growing confidence and stature that they rued the chance to seize control of the 1994 World Cup Qualifiers group.

In November 2020, Roy Keane was speaking about the legacy of Diego Maradona when he recalled that Ireland trip to Seville.

Ahead of that match, Ireland used Sevilla's training facilities. While training there, several members of the Ireland squad hung about to watch Maradona train.

"We just watched him train one afternoon. I remember Jack Charlton going, 'Come on, get on the bus!'" Keane said.

"He was doing free kicks. Brilliant, brilliant player. World class. Even with all his flaws, that was part of the attraction as well for me, I thought.

Roy Keane has recalled a brilliant story of his teammates watching Maradona in training, as Jack Charlton tried to get them back on the bus... 😂 pic.twitter.com/TtEQocifDQ

While Roy Keane was enthralled watching 'El Diego' do his training ground magic, the Argentina legend was hit with a similar sensation when he watched Roy Keane boss the midfield battle at Estadio Ramón Sánchez-Pizjuán.

"He impressed me with everything he did. Nobody could touch him that day. He is for the future."

Sky caught up with Keane for an interview, that same 1992/93 season, and tried to get a rise out of the young midfielder by mentioning Real Madrid, Liverpool and Blackburn Rovers as potential transfer destinations. They also referred back to those glowing Maradona comments.

"Nah, I just don’t take any notice of it, you know,” Keane replied.

"I just concentrate playing week in, week out for Forest trying to play well, simple as that."

Throwback to a young Roy Keane being linked with moves to Blackburn, Liverpool and Real Madrid 👏

'Oh my God, he was seething'

By the end of the season, Roy Keane would be on the move.

Blackburn Rovers were the favourites but, once he heard the young Irish midfielder was definitely leaving Nottingham Forest, former Manchester United boss Alex Ferguson got involved.

Alan Shearer, who was with Blackburn at the time, once recalled being out for dinner with Rovers manager Kenny Dalglish when he discovered Ferguson had swiped Keane from under their noses.

Keane went on to win seven league titles, four FA Cups and a European Cup with Manchester United. Diego Maradona was right, back in November 1992. Roy Keane was 'for the future'.