This is why they bought him.

When Cristiano Ronaldo joined Juventus from Real Madrid last summer, he was meant to be the team's missing piece. The Italian champions didn't spend over £100m on Ronaldo to help them dominate domestically. That was a given, Juventus had won seven Serie A seven times in a row.

What they needed was a player to help them win the Champions League for the first time since 1996.

They needed a big-game player to step up in the important moments and be the difference. On Tuesday night in Turin, that's exactly what they got, and the Portuguese forward may have set them on their way to winning the European Cup.

They're in the quarter-finals of the tournaments thanks to his brilliance.

Juventus were 2-0 down to Atletico Madrid from the first-leg of their Champions League tie. They needed three goals against one of Europe's stingiest defences, a seemingly impossible task.

However, they overcame the odds thanks to Ronaldo. The Portuguese forward opened the scoring after 27-minutes with a powerful header at the back post.

Federico Bernardeschi curled a wonderful cross to his teammate, who outjumped Diego Godin and buried the ball beyond Jan Oblak in the Atletico goal.

It was just his second Champions League goal of the season, but his 125th goal in the competition in total.

GAME ON! And who else could it have been? Ronaldo scores only his second Champions League goal of the season to claw back a goal against his old rivals #UCL #RTEsoccerhttps://t.co/hK5GI6Q72J pic.twitter.com/it19yb0187

Juventus kept the pressure on Atletico after reducing the deficit and never gave their opponents a moment's rest. The Italian champions drew level in the tie just after half time.

Ronaldo, yet again, was on hand to score the vital goal. Bernardeschi hit another cross into the box and found Ronaldo, who had positioned himself between the Atletico central defenders and directed a thumbing header at goal.

Oblak managed to make an impressive save. However, goal-line technology showed that the ball had crossed the line.

'A little bit of history in Turin' - That man again. A goal invisible to the naked eye. We are all square in the tie #RTEsoccer #UCLhttps://t.co/hK5GI6Q72J pic.twitter.com/kVKuHi4BuZ 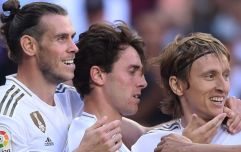 END_OF_DOCUMENT_TOKEN_TO_BE_REPLACED

At that point the scores were level and the game was heading for extra time if another goal couldn't be found.

An Atletico goal would have meant Juventus needed two more, due to the away goals rule, but the Spanish side were content to try to keep it tight and slow proceedings down. However, it didn't work.

Juventus won a penalty five minutes from time and Ronaldo stepped-up to dispatch it. Juventus were through and Diego Simeone's side went crashing out.

Was there ever any doubt? 3-0, @cristiano hat-trick. Game over? #ucl #rtesoccerhttps://t.co/hK5GI6Q72J pic.twitter.com/k4D2NfPjWr

The 34-year-old has scored more goals than any other player in the history of the competition. He has won the Champions League five times. However, even for a player who has won it all, this was special - one of the defining nights of his career.

Yet again, Ronaldo proved that he is the ultimate big-game player.