We always knew that Manuel Neuer had a dribble in him but, Jesus, who knew he could hit a ball this sweetly.

The Bayern Munich goalkeeper is redefining his trade with dazzling skills and midfield antics becoming a trademark of Neuer's game at this stage.

It seems like every week there's another piece of sweeping keeping from the German international and his latest piece of training ground magic will send a warning shot to Bayern centre-forward Robert Lewandowski as it seems like Neuer has more than enough ability to lead the line. 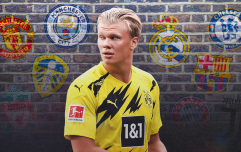 You're Erling Haaland - choose your next club

END_OF_DOCUMENT_TOKEN_TO_BE_REPLACED

During training this week, the shot-stopper turned into shot-belter as he let rip with a stunning effort 25 yards from goal.

The ball would likely have ripped the net given its power but, luckily, the crossbar was hit first and the ball bounced down and over the goalline (which always adds to the aesthetics of a goal).

Manuel Neuer is a goalscoring goalkeeper and, in honour of his latest bout of wrecking his fellow Bayern keepers' heads, here are three of our favourite pieces of proof that he can simply do it all.


popular
"It's giving the Kerry team a bad image. They don't look like footballers, they look like gurriers." - Liveline has peaked
Bundee Aki overheard in the stands after Faf de Klerk hit on Conor Murray
Eoin Murphy's calls from the goals show Cork they're in for a completely different ball-game
"That's one of the best races I've ever had" - Coscoran kicks like a demon to seize the day
Gatland on his decision to start Bundee Aki, and drop Tadhg Beirne
The SportsJOE 12 o'clock quiz | Day 377
Aidan O'Shea better get to a telly soon after his All-Ireland semi-final admission
You may also like
7 months ago
Leon Goretzka explains why he turned down "great club" Liverpool
10 months ago
Thiago bids heartfelt farewell to Bayern ahead of move to Liverpool
11 months ago
Every neutral getting really excited at Messi transfer reports
11 months ago
Liverpool agree four-year contract with Bayern Munich midfielder Thiago Alcantara
11 months ago
Barcelona will have to pay Liverpool if Bayern Munich win the Champions League
1 year ago
Is Robert Lewandowski underrated? Maybe
Next Page