Richie Towell made his first start of the season at the weekend and helped his side to a 1-0 win.

Towell played 83 minutes for Rotherham United in their Championship win over Derby County and was involved in one of the game's big flashpoints.

Derby's Tom Lawrence was shown a straight red card for hacking down the Dubliner just after the hour mark, in an incident that saw players from both sides pile in.

To make matters worse for Derby - and to further incense their manager Frank Lampard - Rotherham were then awarded a penalty when the linesman spotted a push in the box.

That caused another delay as County players argued the toss but it did not put off Ireland U21 international Ryan Manning. The midfielder, on loan from QPR, coolly slotted home the resulting spot-kick.

Lampard's boisterous and remonstrative protests eventually saw him being sent to the sidelines after 78 minutes. He had to watch the final minutes from the stands as Rotherham held on for the win.

Following the game, Towell spoke with reporters about his comeback, the red card and the incident that led to Manning's match-winning penalty. The 27-year-old said:

"The ref is a top referee so I'm sure he doesn't take into the equation how the fans react. Their bench, our bench and [both sets of] players reacted bad.

"I didn't see much of everything; I was on the ground. I just remember he caught me late and quite high. To be fair, I don't know what the tackle looked like but anyone that I've spoke to has said it was quite bad, and he did catch me high so the referee made the right decision." 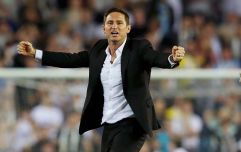 END_OF_DOCUMENT_TOKEN_TO_BE_REPLACED

As for the penalty, which came after Kyle Vassell went down in the box, Towell was unsighted and admitted he asked the closest Derby player to him, 'What happened there?'

"We're big underdogs so we're going to need things going in our favour," he added. "Thankfully they did today and we got the three points."

As for Lampard, he told the BBC that his main grievances were over a handball that wasn't spotted, the penalty and a lack of communication from the referee.

"I like communication with officials but there was none of that," he said.

"It wasn't a penalty. They got a soft one but we didn't get one. Everything was going against us. It was one of those games. Once the melee started you sort of read the script."