Derby County have released a strongly worded statement aimed at 'a small group' of their players that stayed out late, on Tuesday, after a team-building dinner and 'continued drinking into the night'.

END_OF_DOCUMENT_TOKEN_TO_BE_REPLACED

The Championship side has responded to a story first reported by The Telegraph and confirmed that club captain, and Republic of Ireland international, Richard Keogh is out for the season with a 'serious knee injury' after he was involved in 'an alcohol-related incident'. 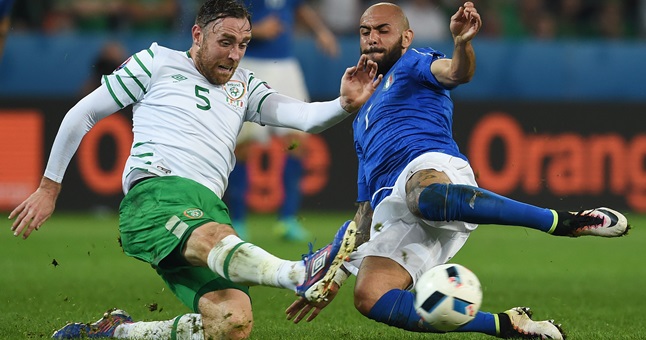 That incident has been reported as a car crash while Derby teammates Mason Bennett and Tom Lawrence were said to have stayed out late with Keogh after the dinner.

The Derby statement reads, in full:

'As a club, we cannot, and do not, condone the actions of a small group of players on Tuesday evening.

'The players were out as part of a scheduled team-building dinner with staff and while the majority of them acted responsibly and left at around 8pm and were not involved, a small group, including the team captain Richard Keogh, continued drinking into the night. They should have known when to stop and also ignored the opportunity to be driven home using cars laid on by the club, and chose to stay out.

'As a result of an alcohol-related incident, Richard Keogh has sustained a serious knee injury that will prevent him from playing until the end of the season.

'The players involved in the incident on Tuesday evening will be subject to a rigorous internal investigation under the club’s code of conduct and disciplinary procedures, but over and above any punishment they receive we will be expecting them to become involved with the excellent work the Community Trust does helping the communities we serve.

'We have been very clear about our attitude towards alcohol and the players know that at certain and specific times of the season they are permitted a drink together as a group in a controlled environment.

'Those involved in Tuesday’s incident know they will pay a heavy price for their actions, but also that we will support them with their rehabilitation back into the squad and team.

'We fully support the work of our partners at Drinkaware and the unsanctioned actions of this small group of players is totally at odds the stance that both Drinkaware and Derby County Football Club take regards alcohol. We will be using this situation to redouble our efforts in highlighting the dangers posed by alcohol.

'We would also like to thank the emergency services for their swift help.'


popular
"Some of the generals wanted me executed" - Irish rugby legend on flag caper that went wrong
"Johnno went, 'We’re not moving! You're trying to mess us about!'" - Ben Kay recalls red carpet controversy
Rio Ferdinand claims that Cristiano Ronaldo should have been told to 'sit down' against Young Boys
Garry Ringrose challenges "pretty ridiculous" changing conditions for women's players
Peter Keane's future as Kerry manager in doubt after strange statement
It won't mean much but Pat Spillane's compliment to Mayo and to Lee Keegan says it all
GAA make retrospective decisions on John Small and James McCarthy incidents
You may also like
1 week ago
Serbian media react to 'True Football Tragedy' and hail "amazing" Gavin Bazunu
1 week ago
Brian Kerr sticks the boot in while Liam Brady emerges as Stephen Kenny's biggest ally
1 week ago
"I was already taking my jersey off!" - Andrew Omobamidele's post-match interview was so pure
1 week ago
Gavin Bazunu, Andrew Omobamidele and a glimpse of better days ahead
1 week ago
Our full player ratings as Ireland's next generation star in Serbia draw
1 week ago
Stephen Kenny makes four changes to Ireland team for Serbia clash
Next Page