Republic of Ireland name team to play against Northern Ireland

Martin O'Neill has named his team.

The Republic of Ireland have named their starting team to play Northern Ireland.

The two sides play each other at the Aviva Stadium in Dublin, and both could do with a win.

END_OF_DOCUMENT_TOKEN_TO_BE_REPLACED

With the Uefa Nations League due to conclude over the coming days, both the Republic and the North are set to be relegated from their respective groups. Ireland wrap up their group campaign with a match against Denmark on Monday. And could be relegated by the time they travel to Aarhus, depending on the result between Wales and Denmark on Friday evening in Cardiff.

Martin O'Neill's side could do with a positive result against Northern Ireland.

Here's the Republic of Ireland starting team for the game:

BREAKING: Martin O'Neill has named his side to face Northern Ireland with Robbie Brady returning to the team for the first time in a year! #COYBIG #IRLNIR pic.twitter.com/aeRV1xxV2x

Here are the teams for the game: pic.twitter.com/YMpyP0PE0v

But here's how we think this side will line out: 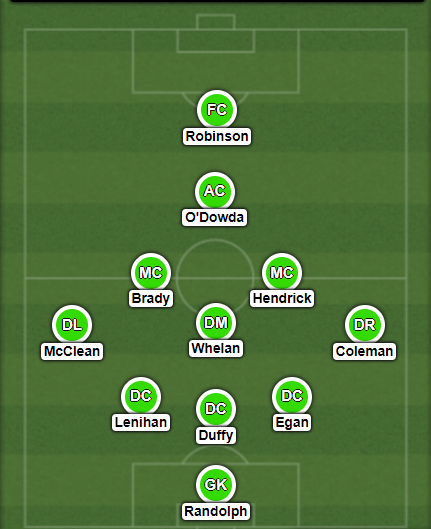 
popular
Kilmacud Crokes to counter Glen's objection over extra players in All-Ireland final
"He's a serious specimen, 6 ft 3 as well, so he's an incredible athlete" - Geaney hails O'Connor's impact
"It's very clear how I felt about it. I had a very definite view on it" - McEntee on Dunboyne's 2005 semi-final saga
January transfer window 2023: Follow the latest updates live in our hub
The two toughest calls in Ireland team to face Wales are in the backline
"He didn't give me that jersey back!" - Johnny Sexton on new rival Jack Crowley
Laura Woods savages Twitter user after he asks her to come over while his wife is at work
You may also like
1 month ago
Roy Keane cracks ice cold Ireland joke after France lose World Cup final to Argentina
1 month ago
Ireland reportedly line up Lee Carsley as next national team manager
1 month ago
Talksport presenter puts Martin O'Neill to the pin of his collar over Declan Rice and Jack Grealish
1 month ago
UEFA fine FAI €20,000 for Ireland dressing room song
1 month ago
The 10 England World Cup footballers who could have played for Ireland
1 month ago
Shay Given on how far Ireland could've gone at the 2002 World Cup with Roy Keane in the team
Next Page