El Pais journalist Diego Torres has reported that Liverpool manager Jurgen Klopp was 'amazed' and 'broke into hilarity' when he first heard that Barcelona were going to offer €100 million for former midfielder Philippe Coutinho.

Torres, who wrote The Special One: The Dark Side of Jose Mourinho, has been covering PSG forward Neymar extensively this season but he has now shifted his attention towards his international teammate Coutinho and his January move from Liverpool to Barcelona.

Torres suggests that Coutinho was never fit enough to operate under Klopp's pressing system of football and that leading goalscorer Mohamed Salah was brought in to compete with the Brazilian while Sadio Mane and Roberto Firmino were deemed 'undroppable'.

"When the club raised the possibility of signing Mohammed Salah, the coach told the management that he thought it was fine but that the position should be played with Coutinho. Never with Mané or Firmino, whom he judged unquestionable.

"In Liverpool offices were not surprised to see that the leaders embraced as if they had won a title when on 6 January closed the transfer of Coutinho to Barca for 160 million euros, a record after Neymar and Mbappé. Never the sale of the third most expensive soccer player in history meant less sacrifice and more benefit for a major club.

"Explosive and decisive in short spaces, Coutinho lacked the heart and lungs to perform consistently in the great spaces of the midfield. In the physical tests that simulated situations of the game, after two sprints of 60 meters Coutinho could not recover without remaining half a minute completely stopped. Too much, given the tactical demands. With the emphasis on permanent dynamism, Klopp discarded Coutinho to integrate the midfield in 4-3-3. Even when he placed it as an end, he found that it disengaged in the folds. During several days he tried a 4-2-3-1 to place him behind the point, with a smaller radius of action to avoid suffering. If he played as a second point he could stay off the hook without generating serious imbalances, while the rest of the team was ordered 20 meters back. But the 4-2-3-1, in Klopp's opinion, did not allow the team to occupy the spaces in the most efficient way possible.

"Barça's first offer for Coutinho amounted to 60 million euros, about a year ago. Klopp's reaction was perplexing. He thought that Barcelona had the three attack squares covered with Messi, Suarez and Neymar.

"When they told him that [Josep] Bartomeu would sign [Ousmane] Dembelé to replace Neymar and offer more than 100 million for Coutinho to act as relay for [Andres] Iniesta, his amazement broke into hilarity. According to an employee of the English club, Klopp was blunt: "Coutinho is a fabulous forward but he will never feel comfortable in 4-3-3 as an inside; and much less if he has to play in the post of Iniesta in the 4-4-2 that [Ernesto] Valverde practices in the defensive phase, where the longer runs should be done by the wings. Iniesta is a long distance runner. Coutinho no. "

When Coutinho eventually sealed his £142 million move to Barcelona, Klopp said that the club did everything within their means to convince the player that remaining part of Liverpool was as attractive as moving to Spain. 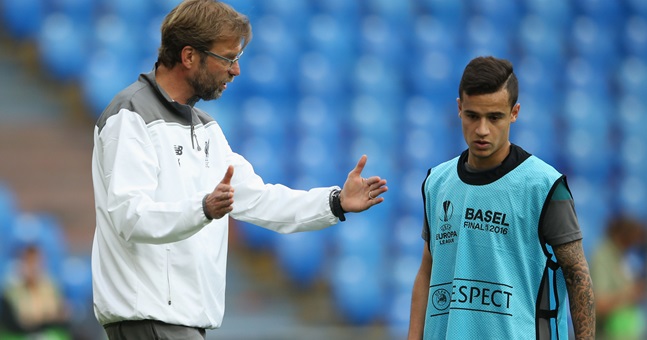 He told Liverpoolfc.com: “It is with great reluctance that we – as a team and club – prepare to say farewell to a good friend, a wonderful person and a fantastic player in Philippe Coutinho.

“It is no secret that Philippe has wanted this move to happen since July, when Barcelona first made their interest known.

“Philippe was insistent with me, the owners and even his teammates this was a move he was desperate to make happen.

“Despite that, we managed to keep the player here beyond the summer window, hoping that we would be able to persuade him to stay and be part of what we are looking to do.

“I can tell the Liverpool supporters that we, as a club, have done everything within our means to convince Philippe that remaining part of LFC was as attractive as moving to Spain, but he is 100 per cent certain his future – and that of his family – belongs at Barcelona. It is his dream and I am now convinced there is nothing left at our disposal to change his mind.

“Philippe has made a fantastic contribution to this club over his five years of service and as disappointed as we are he doesn’t want to extend that, the relationship we have for him means with a heavy heart we wish him well.

“The player remained dedicated and committed to helping us win matches, producing good performances and training hard each day at Melwood after the summer window had closed, despite failing to convince us to allow him to leave during that period and that level of professionalism reflects positively on him.

“Of course, it is totally understandable that supporters will be disappointed; this is always the case when you have to say goodbye to someone special. But, as hard as it is sometimes to accept, it is part of life and part of football – individuals have their own dreams and their own goals and objectives in life.

“Players will come and players will go, that is football, but as a club we are big enough and strong enough to continue with our aggressive progression on the pitch, even when we lose an important player. We have never been in a better position in recent times, as a club, to react in the right way. We will use our size and strength to absorb moments like this and still move forward.

“I have been here long enough now to know in the history of Liverpool, key players have left before – but the club always goes on. You cannot transfer the heart and soul of Liverpool Football Club, although I am sure there are many clubs who would like to buy it.

“I have so much belief in the talent we have here already and even more faith, together with our owners, that we will make continued investment into the playing squad, which will allow more growth and more improvement.

“So as we bid farewell to Philippe, we continue on our path of progress and development as we work towards our common goal of bringing trophies back to Anfield.”