Being a referee is no easy gig. Make a mistake in a high-profile game and you're probably going to find your name in one or two unwanted headlines. Rarely though, do such errors cast ripples that transcend countries and continents, such as the one made by poor Oscar Macias over the weekend.

In charge of the Liga MX game between Cruz Azul and Toluca on Sunday, Macias had seen the home side had built up a two-goal league inside the opening half an hour.

With ten minutes to go to the interval, Cruz Azul looked certain to add a third to all but end the contest. After rounding the goalkeeper, a Luis Romo shot from an acute angle struck a post, but rebounded kindly for Jonathan Rodriguez to steer home.

Having followed the play into the area, however, Macias found himself in the firing line, inadvertently turning the ball wide of goal with his heel, much to the annoyance of Rodriguez and his teammates.

The referee signalled for a goal kick for Toluca, who, somewhat predictably, got themselves back in the game before half-time. A goal from Miguel Barbieri followed by a converted penalty from Alexis Canelo saw the scores level at the break. 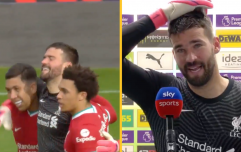 END_OF_DOCUMENT_TOKEN_TO_BE_REPLACED

Fortunately for Macias, Cruz Azul re-took the lead in the second half through Guillermo Fernandez, holding on for a 3-2 victory and no doubt sparing the referee any extra controversy.

No matter how impartial he is, the full-time whistle must have come as a mighty relief for the man in the middle.