It had nearly half a million subscribers.

Reddit's soccer streams page has been shut down after a warning over copyright infringement as the Premier League clamps down on illegal streams.

The popular subreddit had become the go-to place for football fans to find good quality streams for games that they could not watch on television. As its popularity grew, it amassed more than 400,000 subscribers.

But after many - almost all - of the links on the page were found to be illegal, a moderator post was published on the page on Saturday, which read:

"I regret to inform you all that a few days ago, the Reddit Admins got in touch with us about an impending ban of this subreddit if changes weren't made.

"The only way to save it, from our perspective, was to cease all user-related activity here."

The popularity of the page came after subscription prices for TV packages and online services grew and grew, driving football fans to resort to using illegal online feeds to catch their teams in action.

The soccerstreams subreddit attracted the most users during the 2018 World Cup, with Google searches for 'Reddit Soccer Streams' beating those for the president of the United States. 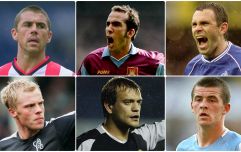 QUIZ: Name these 42 Premier League players from the 2000s

END_OF_DOCUMENT_TOKEN_TO_BE_REPLACED

This was a major boost for the Premier League, as previously they had to target individual websites in a bid to remove illegal broadcasts.

Last year Reddit started to issue warnings to moderators of subreddits about links to illegal streams and downloads of films and TV programmes being uploaded.