Ravel Morrison looking for 13th club after having contract terminated

Ravel Morrison has had his contract with ADO Den Haag terminated by mutual consent after playing just four matches for the club.

The Dutch team signed the the midfielder in September 2020 after he had been released by Sheffield United after just one season, but Morrison's time in Holland has now been cut short too, after less than five months. In a statement posted on the club website, the Eredivisie side said:

"ADO Den Haag thanks Morrison for his efforts and wishes him the best of luck in his further career."

This is just the latest instalment in a long list of ill-fated spells in Morrison's career since he left West Ham United, where he enjoyed a brief spell of form in the Premier League as a 20-year-old. 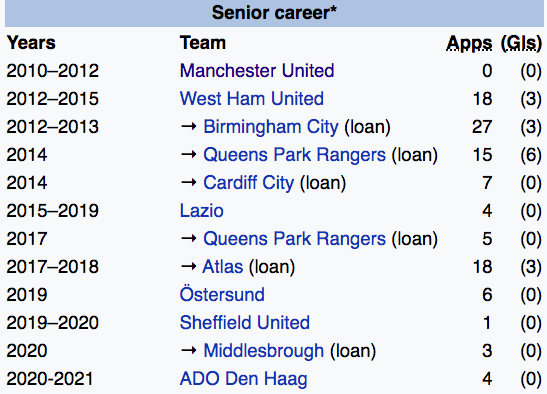 Before ADO Den Haag, it was thought that the mercurial playmaker might have found a home at Sheffield United, with Chris Wilder describing the move as "a good fit for the player and the club." Alas, the former Manchester United youngster ended up on loan at Middlesbrough, before he was sent back to Brammal Lane before the end of last season.

END_OF_DOCUMENT_TOKEN_TO_BE_REPLACED

That followed a six month spell in Sweden at Ostersund, where his performances earned praise from the manager but he was not kept on due to repeated injuries and his high salary demands.

Morrison is still only 27, but with only 140 club appearances to his name throughout his entire career, it is impossible to look back on his career as a tragic example of wasted talent, given Alex Ferguson once described him as "the best he'd ever seen."

"Ravel Morrison might be the saddest case," Ferguson once wrote of Morrison, in his book 'Leading'. "He possessed as much natural talent as any youngster we ever signed, but he kept getting into trouble."

popular
Roy Keane's first impression of Cristiano Ronaldo proved to be very accurate
The SportsJOE 12 o'clock quiz | Day 290
The 14 Irish players Down Under as TG4 come up with the goods once again
Lady Gaga will perform Satanic ritual during Super Bowl halftime show, according to conspiracy theorist
"I kind of decided on Hill 16, 'you're either going to do this or you're not going to do this.'"
The SportsJOE 12 o'clock quiz | Day 289
Joe Rogan reveals he could be parting ways with the UFC
You may also like
1 day ago
Jurgen Klopp blames himself as Liverpool fall to "impossible" defeat to Burnley
1 day ago
Manchester City suffer Kevin De Bruyne injury blow
1 day ago
Players involved in European Super League will be banned from international tournaments, says FIFA
1 day ago
Derby to appeal decision ordering them to pay Richard Keogh £2m in compensation
2 days ago
Fernando Torres has got absolutely jacked since retiring from football
2 days ago
Michail Antonio pays £20k insurance after crashing Lamborghini while dressed as snowman
Next Page