Raheem Sterling has moved to explain the meaning behind his new gun tattoo.

The Manchester City and England star has been pictured with what appears to be the image of a M16 rifle on his lower right leg.

Describing it as a 'sick new tattoo' The Sun saw fit to make this the main story on their front page on Tuesday morning. The publication also pointed out how the tattoo had 'sparked fury' and drawn criticism from anti-gun campaigners, with some of them calling for him to be withdrawn from England's World Cup squad as a result. 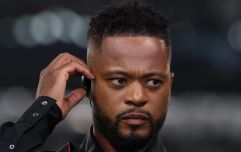 Patrice Evra was "ashamed to admit" he was sexually abused

END_OF_DOCUMENT_TOKEN_TO_BE_REPLACED

Sterling later responded to the front page on his Instagram Story, explaining the tattoo was a reminder of how he had promised never to touch guns following the death of his father, who died after being shot when the former Liverpool player had been a small child. He also added the tattoo had 'deeper meaning' and was still unfinished.

'When I was 2 my father died from being gunned down,' the message from Sterling reads. 'I made a promise to myself I would never touch a gun in my life.'

Gary Lineker later described The Sun's treatment of Sterling as 'disgusting', calling for the paper to 'leave him alone'.

He’s a terrific footballer with a brilliant work ethic. This persecution is disgusting. https://t.co/bx3JArBt1L


popular
Sub goalie saves last-minute Diarmuid O'Connor penalty as Knockmore march on
Where Ireland's highest earners sit in relation to rugby's top-paid players
Five surgeries by 26 and getting injured by a melon in training
Billy Burns has night to forget as Connacht blow Ulster away
Last-gasp winner by Fionn McDonagh sees Westport edge out Ballina in Mayo thriller
Player voices fall on deaf ears as Congress reject GAA championship restructure
Shane Walsh: 'That's not how I was coached to play football. No one was coached to play football that way'
You may also like
1 week ago
Scott Parker sends David Brooks message of support following cancer diagnosis
3 weeks ago
Rangers man Glen Kamara ‘booed with every touch’ by kids under 14 during Sparta Prague tie
3 weeks ago
West Brom fan who racially abused Romaine Sawyers sentenced to eight weeks in prison
1 month ago
Benjamin Mendy to remain in prison until January 24
1 month ago
Benjamin Mendy to appear in court on Friday to set date of trial
2 months ago
Germany and Bayern Munich legend Gerd Muller dies, aged 75
Next Page