Sterling played no part in England's 3-0 win over Senegal.

Raheem Sterling flew back from the World Cup after armed intruders broke into his home while his family was there, reportedly stealing watches worth £300,000.

The England star missed the Three Lions' 3-0 last-16 win over Senegal on Sunday, after learning what had happened on Saturday.

The 27-year-old was said to be shaken and concerned about the well-being of his children. The Mirror reported that the France match isn't a priority for Sterling or England at the moment. 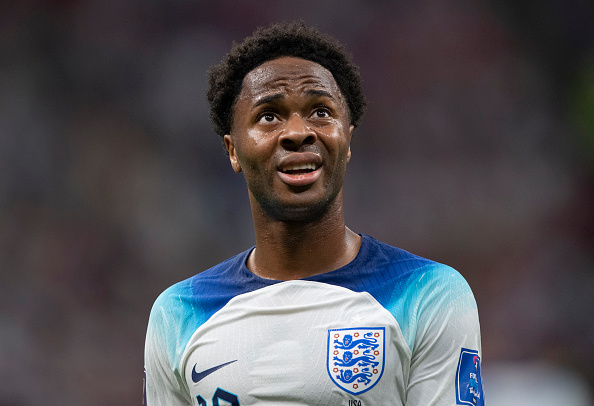 END_OF_DOCUMENT_TOKEN_TO_BE_REPLACED

The Sun reported that Sterling's fiancée Paige Milian, 27 was at home with their two children when the break-in happened and that watches worth £300,000 was taken from his home near Chelsea's training ground in Cobham, Surrey.

Southgate said following the win over Senegal: "We will have to wait and see [if he'll be back to play against France], at the moment, clearly the priority is for him to be with his family and we're going to support that.

END_OF_DOCUMENT_TOKEN_TO_BE_REPLACED

“We’ve got to give him time to try to resolve that or be there for his family. That’s the most important thing at this time, so we’re going to give him that space."

Southgate said Sterling's return to the UK did not impact team selection and that he had spent "a lot of time" with the player on Sunday, saying, "You have days where events happen and you have to deal with them".

He added: "We're going to allow him to have as much time as he needs. He's going home, yeah.

"I really don't know because at the moment it's a situation in which he needs time with his family. I don't want to put him under any pressure. Sometimes football isn't the most important thing and family should come first."

The FA said on Sunday night: “Raheem is not available for selection for the Three Lions tonight as he is dealing with a family matter.”


popular
"He rode him like a machine rather than a racehorse" - Mullins doesn't spare Townend as second string come good
Matt Williams wants two changes and Peter O'Mahony benched for Ireland vs. France
"Remember that name" - Sonny Bill Williams raves about Ireland U20 star after outrageous try assist
Ireland vs Wales: All the big talking points, moments and player ratings
Peter O'Mahony reaction to Liam Williams scuffle shows he may finally be mellowing
Warren Gatland says Andrew Porter needs 'kick up backside' after flashpoint tackle
"The truth is I've never actually worked a day in my life" - Russell bows out on his own terms
You may also like
2 days ago
Ireland vs Wales: All the big talking points, moments and player ratings
1 week ago
Owen Farrell praises Johnny Sexton in revealing interview ahead of Six Nations
1 week ago
RFU issue statement following backlash over decision to lower tackle height
2 weeks ago
Anthony Watson names the Six Nations game he looks forward to the most
1 month ago
Roy Keane gives England one last parting dig as they leave Qatar as tournament's 'nicest' team
1 month ago
Erik ten Hag: 'Jadon Sancho isn't physically and mentally fit enough to return to training'
Next Page