Gerard Piqué and Sergio Ramos famously have a professional rivalry.

Barça were without their star man Lionel Messi, but put in an excellent team performance, with Philippe Coutinho and Luis Suarez stepping up in their captain's absence. Gerard Piqué also showed great maturity to recover from recent mistakes when it mattered most.

END_OF_DOCUMENT_TOKEN_TO_BE_REPLACED

Real Madrid, meanwhile, looked as disjointed as ever. And this defeat appears to have sealed Julen Lopetegui's fate, as the manager looks set to be sacked in the coming hours.

Piqué, who recently retired from the Spanish national team, has had an enduring professional relationship with Sergio Ramos, the Madrid captain who embodies the club. 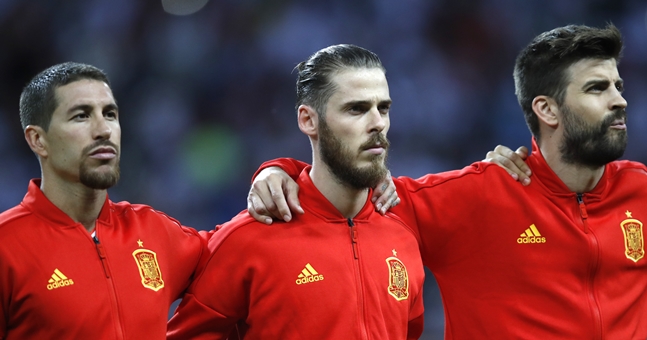 For Spain, the pair put club rivalry aside to play alongside each other, but in the Clásicos, there has always been a tension between the pair. A proud Catalan against a proud Spaniard, representing sides on opposite ends of the world's most historic and politicised rivalry.

END_OF_DOCUMENT_TOKEN_TO_BE_REPLACED

One moment in this weekend's Clásico, though, demonstrated Piqué's maturity, leadership and the mutual respect between the two rivals.

As Barcelona fans were signing 'Sergio Ramos, hijo de puta' (son of a bitch) from the stands, Piqué signalled to them to stop, suggesting that Ramos did not deserve such abuse.

Barça did their talking on the pitch on Sunday, adding another 'manita' to their head to head record with Real Madrid.

Real Madrid are now lurking in ninth place in LaLiga, seven points behind Barcelona, while the Catalans are cruising at the top, well on their way to retaining the league title.

Antonio Conte looks set to replace Lopetegui once his dismissal is announced, a decision that is reportedly very popular among the players, apart from Thibaut Courtois, who had problems with Conte during their time at Chelsea together.


popular
Ireland vs Wales: All the big talking points, moments and player ratings
Peter O'Mahony reaction to Liam Williams scuffle shows he may finally be mellowing
Patrick Horgan addresses infamous Kieran Kingston interview after Cork beat Limerick
Matt Williams tears into media for "rubbish" written about Ross Byrne
Conor McGregor offers solution to Croke Park fiasco that should suit all parties
"You know why" - Jurgen Klopp refuses to speak to Athletic journalist at press conference
Allianz National League Round 2: All the action and talking points
You may also like
1 month ago
Karim Benzema given special authorisation to appear in World Cup Final
2 months ago
Graeme Souness labels part of Gareth Bale's career as "a joke" in harsh analysis
2 months ago
Karim Benzema says Cristiano Ronaldo still hasn't congratulated him on Ballon d'Or win
3 months ago
Iker Casillas says his account was 'hacked' after 'coming out' tweet
3 months ago
“I hope you respect me: I'm gay” – Casillas deletes 'coming out' tweet
3 months ago
Man City want to renegotiate Erling Haaland deal to cancel Real Madrid clause
Next Page