If only Uefa had liked their page, they would have seen this coming.

A group of Croatian ultras brought Friday's game against the Czech Republic to a halt. Croatia were heading towards a 2-1 win with the clock winding down when a number of flares were thrown onto the field, with one exploding in the face of an unfortunate steward who was trying to clear the pitch.

In hindsight, the incident proved costly to the Croatian team, who pleaded for calm from their supporters, and went on to drop two points after conceding a penalty in added time.

Whatever way you look at it, the scenes were inexcusable, but this does shine some light on the incident https://t.co/PsiB4Ol1Vo

END_OF_DOCUMENT_TOKEN_TO_BE_REPLACED

It turns out the group responsible for disrupting the match actually gave away their plans on social media before the game even kicked off.

A screenshot has emerged on Reddit showing that the hooligans responsible for the disruption had posted their plans two hours before kick-off. Torcida Split 1950 posted a blueprint of the Stade Geoffroy-Guichard showing the location of the ultra groups and what they would attempt. You can check it out below. 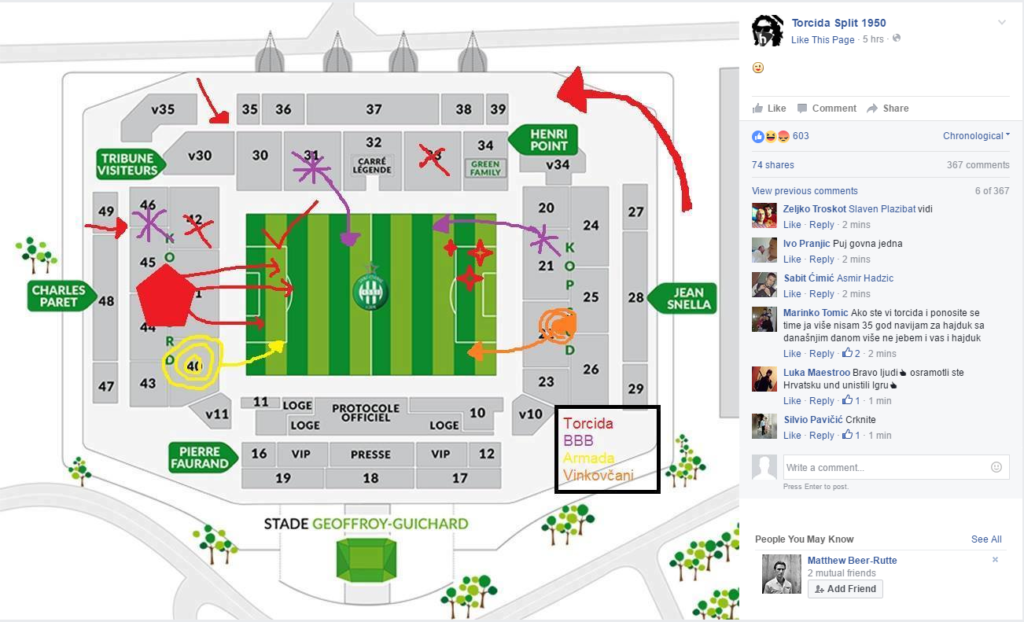 
popular
The FootballJOE Pub Quiz: Week 11
Jesse Lingard seeks to clear up what United fan shouted when he was warming up
Man United's tactical issues summed up in six shocking screenshots
O'Hora and Keegan hammer into each other, both of them only revelling in it
Paul Scholes rips into Pogba after disgraceful performance vs Liverpool
McBrearty has dramatic equaliser ruled out as Naomh Conaill win Donegal grudge game
Liverpool's half-time words in Old Trafford dressing room will please fans greatly
You may also like
2 years ago
Jon Walters on Ireland's 'French Foreign Legion' security at Euro 2016
3 years ago
Every step the English hype train is about to take ahead of the World Cup
3 years ago
Cristiano Ronaldo story shows how far Robbie Brady has come
3 years ago
An insane amount of people watched Wes Hoolahan's goal against Sweden
4 years ago
Ranking Ireland's home jerseys of the last three decades
4 years ago
QUIZ: You have ONE minute to name the Ireland team that played Sweden at Euro 2016
Next Page