"What he said was poor. Really poor."

Manchester United defender Phil Jones has hit back at comments made about him by his former teammate, Rio Ferdinand.

Jones has made a limited number of appearances for United due to a string of injury problems in recent years. Speaking on his podcast last month, Ferdinand labelled Jones a "waste of time" and claimed his presence at United was taking up a valuable squad place which would otherwise be available for a youth team player.

END_OF_DOCUMENT_TOKEN_TO_BE_REPLACED

Jones' manager Ole Gunnar Solskjaer criticised the comments and, having since been aware of the extent of the 29-year-old's injury troubles, Ferdinand later admitted he was wrong and issued an apology.

In an interview given to The Times, Jones stressed he had huge respect for Ferdinand, but was disappointed by the comments he made.

"Listen, the respect I’ve got [for Ferdinand] is enormous," Jones says. "I’ve shared a dressing room with Rio - great professional. Loved playing with him. Great lad, good humour. Learnt so much off him. 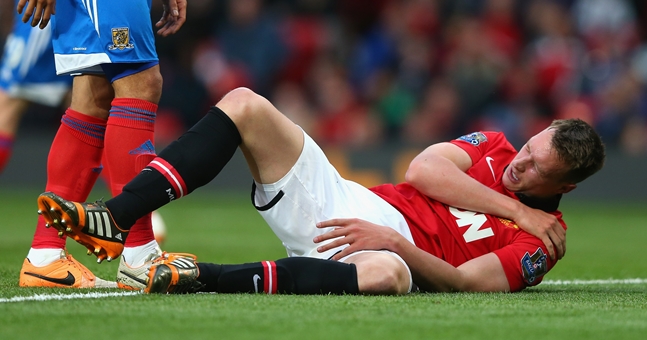 The same article details how Jones has been sidelined with severe damage to the lateral meniscus of his right knee - a problem which first surfaced when he was a youth player a Blackburn Rovers.

He later adds that he is surprised that Ferdinand claimed not to be aware he was injured.

"Look, I’m private," he says, "so maybe people don’t understand me, but that’s the total opposite to how I am. I’ve done my absolute utmost [to be fit enough to play].

"From tablets, to my diet, to setting up my house so that every time I get back from training I’m sitting in recovery boots and have my ice machine ready. Nobody can say, ‘You didn’t do enough.’"


popular
Paul Scholes calls a spade a spade after comeback win
It's often forgotten that Tommy Walsh began his career with the same stardom and promise as David Clifford
Derry club win county final factfile games with extravagant set of jobs
Shane Walsh: 'That's not how I was coached to play football. No one was coached to play football that way'
Jordan Larmour primed for a season to remind everyone how good he is
Paul Scholes says Paul Pogba is a "daydreamer" and Fred and McTominay are "limited footballers"
Galway fans' frosty reception for Davy Fitz doesn't make any sense
You may also like
20 hours ago
Paul Scholes calls a spade a spade after comeback win
2 days ago
Ole Gunnar Solskjaer responds to stinging Jamie Carragher criticism
2 days ago
Jamie Carragher believes that Manchester United need a better manager than Ole Gunnar Solskjaer
2 days ago
Marcus Rashford's camp reportedly upset by Solskjaer's over-reaching comments
3 days ago
Man United aren't good enough to accommodate Ronaldo's refusal to work
4 days ago
Micah Richards makes damning claim about Man United under Solskjaer
Next Page