Manchester City manager has said that he has a good relationship with Sergio Aguero and said that their sideline disagreement on Saturday stemmed from tactical positioning.

Manchester City drew 2-2 with Tottenham after goals from Raheem Sterling and Sergio Aguero were cancelled out twice by Erik Lamela and then Lucas Moura.

Aguero was hauled off after 66 minutes for Gabriel Jesus who looked to have scored an injury-time matchwinner until the VAR disallowed the goal.

Pep insisted that it was a disagreement that stemmed from emotion and noted that there is no issue between the two. 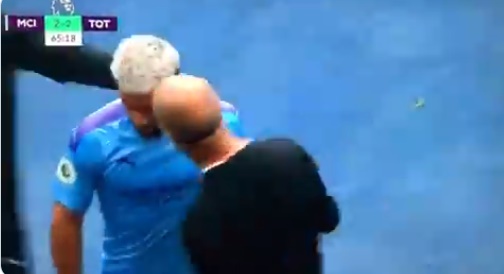 "He thought I was complaining about me wanting goals but it was far away from the reality," Guardiola said in his post-match interview.

"I was just telling him he was too close to Kevin [De Bruyne] in that position but Sergio is an incredibly nice guy.

"We have a good relationship there's just emotion in the game. He's an incredible competitor. He wants to win. Everyone wants to win. I was happy with his position for the goal and that's all."


popular
The SportsJOE 12 o'clock quiz | Day 69
SportsJOE 2000s Football Quiz | Round 1
The SportsJOE 12 o'clock quiz | Day 67
"I went up to the hotel, got attacked in the room and told I'm no longer Tipperary captain"
QUIZ: Name these footballers based on their former teammates
QUIZ: Name the footballers to have played for Manchester United & Real Madrid
"I knew I didn't have the pace or strength, it was just get it and try kick it left or right"
You may also like
5 months ago
Caraboa Cup Quarter Final highlights and semi-final draw
5 months ago
"For me, it's quick, attacking, flowing football with the right intent" - Ole Gunnar Solskjaer
5 months ago
Jesse Lingard and Fred subjected to shocking abuse as United beat City
6 months ago
Three talking points as Liverpool thump Man City 3-1 at Anfield
6 months ago
Player ratings as Liverpool wipe the floor with Manchester City
6 months ago
Liverpool are the Premier League's best team but remain unconvincing
Next Page