Juventus forward Paulo Dybala has been linked with a move to Champions League finalists Liverpool amid increasing speculation that his club will sign five-time Ballon d'Or winner Cristiano Ronaldo.

Ronaldo has been heavily linked with a move to Turin over the last few days which could potentially push Paulo Dybala, Juventus' top scorer from last season, out of the first team should the Portugal captain sign for Massimiliano Allegri's side this summer.

Dybala scored 26 goals in 46 games last season for the Bianconeri and Italian football journalist Alessio Alaimo is reporting that the Argentine international could be set for a move to Liverpool this summer should Ronaldo make the move to Italy.

"While Juventus tries to understand the feasibility of the operation Cristiano Ronaldo, Liverpool attempts the assault on one of the pillars of the Bianconeri attack," Alaimo wrote for Italian football websie Tuttomercatoweb.

"There was a contact between the impresario Gustavo Mascardi, historically close to Paulo Dybala, and the English club.

"The Reds are focusing strongly on Dybala, there is a willingness to formulate a concrete offer and from those who are close to the former Palermo striker, there could also be the intention to facilitate a possible negotiation." 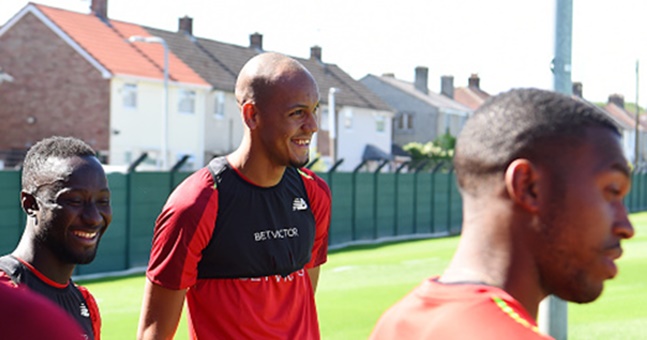 END_OF_DOCUMENT_TOKEN_TO_BE_REPLACED

Meanwhile new Liverpool signings Naby Keita and Fabinho are in line to make their Liverpool debuts in Saturday's pre-season friendly with Chester FC.

Liverpool will open their pre-season campaign this weekend as manager Jurgen Klopp looks to test out his new midfielders while also welcoming Loris Karius back into the fold following his humiliation in the Champions League final loss to Real Madrid in May.

Klopp insists that he does not want to waste any time with either Keita or Fabinho and that he has been impressed by what he has seen from both players during pre-season.

“We still have two or three sessions until we play; unfortunately in football a lot of things can happen," Klopp told the club's official website.

"But if nothing happens then they will play of course. We don’t want to waste time. They are in, it’s good. It’s our first pre-season game so let’s start.

“If they’ll start, I don’t know, to be honest. I haven’t made the line-up so far, I have to see who is available. But, yes, they will be involved for sure.”


popular
World Cup 2022 Day 14: All the major action and talking points
From Ireland to Argentina: Alexis Mac Allister's Irish roots explained
Shay Given on how far Ireland could've gone at the 2002 World Cup with Roy Keane in the team
Positive update on Pele's condition as messages of good-will pour in
"Nowadays, even if I don't hit a ball, I don't care as long as we win" - Gleeson learning from the past
The SportsJOE Friday Pub quiz: Week 3
New released footage shows controversial Japan goal against Spain was right to stand
You may also like
3 weeks ago
James Milner's progress report as a 12-year-old still stands true 20 years on
3 weeks ago
How basic modern sports science would have saved Michael Owen's career
4 weeks ago
Trent Alexander-Arnold makes great point to those who criticise his defending
4 weeks ago
Jordan Henderson reveals how Roy Keane clash had him "dripping with sweat"
4 weeks ago
Jamie Carragher responds to Virgil van Dijk's claim that he wouldn't start in this Liverpool team
1 month ago
FA 'very concerned' about rise in number of Hillsborough chants
Next Page