He has only started one league game so far this season.

According to the owner of Palermo, Paulo Dybala looks set to leave Juventus this coming January after being dropped from the starting XI in order to accommodate new signing Cristiano Ronaldo.

In Juve's first league game of the season against Parma, Dybala started in the number 10 position, but in the two matches since, Max Allegri has opted to revert to a 4-3-3, with Dybala dropping to the bench in favour of another central midfielder.

With Dybala out of favour in Turin, the owner of his former club Palermo, Maurizio Zamparini, has claimed the Argentine will leave the club in January.

"Every time he is left out, it makes me want to cry," Zamparini told RMC Sport.

"He's on the bench because of Allegri. Allegri should come to Palermo and win the Scudetto. Two years ago, I sent Dybala a message and advised him to go to Spain, not Italy.

"He'll leave because Juventus want to get €120million. In January, I think he'll leave for Spain. He has offers in Spain and England. Juventus have a lot of champions and it's obviously a reason to cry when a phenomenon like him is not playing."

Juventus are still figuring out the best way to accommodate Ronaldo, and have loaned out Gonzalo Higuaín to AC Milan, under the premise that Mario Mandžukić will link up with their new star better than Higuaín would have. 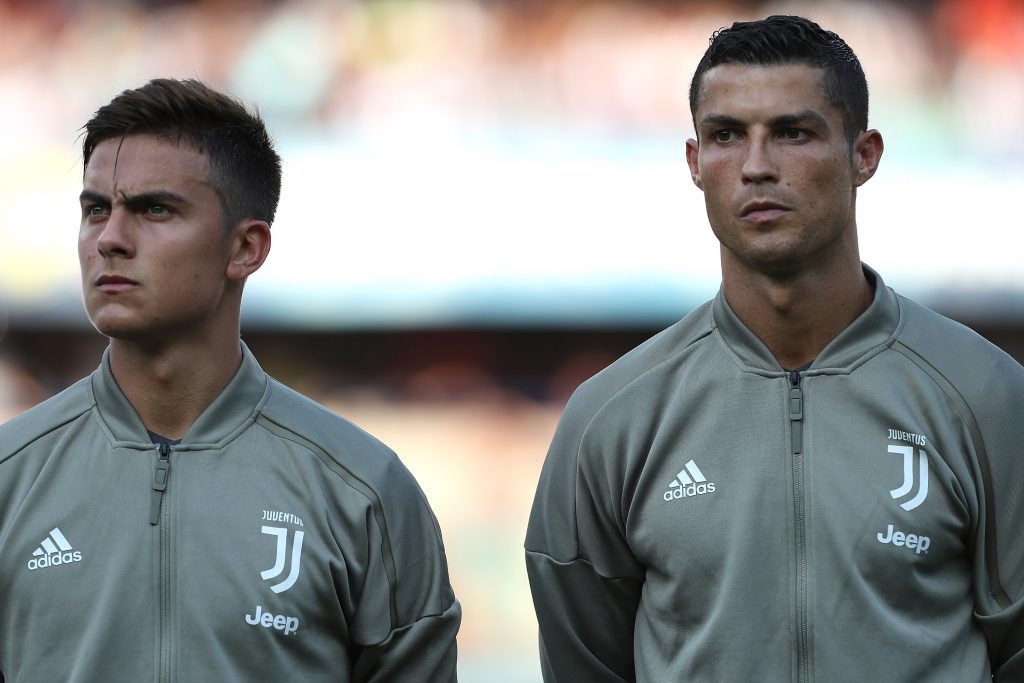 If Dybala does leave, fans of the Bianconeri will not be pleased - he is very popular at the Allianz Stadium and the fans would not appreciate the board showing such short-term thinking.

END_OF_DOCUMENT_TOKEN_TO_BE_REPLACED

If he does leave, he would not be short of suitors, with Barcelona, Real Madrid and Manchester United all showing interest in the past.

However, any potential buyer would have to find a place for him in the team, which could be more difficult than it seems, given his preference of playing as a support striker, and the favoured formations of the aforementioned clubs not including a number 10.


popular
"If I break my wrist, it's on f***ing both of you." - Koepka and Berger act the spoiled child
"I told him the absolute truth" - Sergio Garcia on his Ryder Cup talk with Rory McIlroy
Shane Lowry delivers big time for Europe as he takes down US stars
Simon Zebo gives Andy Farrell better answer than any interview could provide
Galway fans' frosty reception for Davy Fitz doesn't make any sense
Team USA stars so confident of victory, they start chugging beers at Ryder Cup
Padraig Harrington's 12th hole reaction as McIlroy and Poulter roasted needs no words
You may also like
5 days ago
Cristiano Ronaldo scammed out of six-figure sum after passing credit card pin to travel agent
6 days ago
Solskjaer makes fair point as Ronaldo denied two 'stonewall penalties' at West Ham
1 week ago
Rio Ferdinand claims that Cristiano Ronaldo should have been told to 'sit down' against Young Boys
1 week ago
Jesse Lingard drops Man United right in it with horrific back-pass
1 week ago
'Riled' Ronaldo sent Rio Ferdinand Whatsapp during on-air Mbappe-Haaland debate
1 week ago
Jamie Carragher and Gary Lineker in Twitter spat over Lionel Messi mistake
Next Page