Paul Pogba could miss World Cup due to knee injury

Pogba faces a big decision over his knee injury

Paul Pogba could be forced to miss the World Cup in Qatar later this year due to the knee injury he picked up in training with Juventus, reports have claimed.

Pogba sealed a return to Juve from Manchester United at the start of the month, but limped out of a training session in Los Angeles during the Italian club's preseason tour of the United States.

Scans later revealed the midfielder had suffered a torn meniscus, and could require surgery.

Pogba was expected to remain in the States to undergo surgery but has instead flown back to Italy to see a specialist. 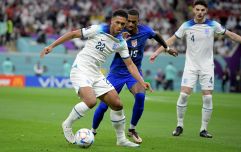 END_OF_DOCUMENT_TOKEN_TO_BE_REPLACED

According to Gazzetta dello Sport, the 29-year-old has two options. One would see part of the meniscus removed, which would keep him out of action for up to two months. The operation is believed to be suited to younger players, however, and could have an impact on his mobility.

The second option would be to stitch the tear, but this could result in a lengthy recovery period of up to five months - ruling him out of France's attempts to defend their World Cup title in Qatar. 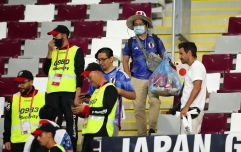 END_OF_DOCUMENT_TOKEN_TO_BE_REPLACED

Pogba is expected to make a final decision after consultation with the specialist.

The midfielder played a key role in France's World Cup win in Russia four years ago and his absence would come as a huge blow to manager Didier Deschamps.

A lengthy period on the sidelines could also prove problematic for his club, who may now look to bring in another midfielder before the close of the transfer window.


popular
Roy Keane cracked up Ian Wright and Gary Neville with England team spirit remark
'I was so stressed the week before the All-Ireland and I ended up having a panic-attack' - O'Shea and O'Sullivan open up
Roy Keane shoots down ITV presenter's 'excuse' for England's draw with USA
World Cup 2022 Day Seven: All the major action and talking points
The nine England World Cup footballers who could have played for Ireland
Amancio Ortega interested in buying Man United from Glazers
Former England international admits he wishes he had played for Ireland
You may also like
1 day ago
The SportsJOE Friday Pub Quiz: Week 2
1 day ago
World Cup 2022 Day Six: All the major action and talking points
1 day ago
Clairvoyant otter predicted Japan's World Cup win over Germany
1 day ago
Amancio Ortega interested in buying Man United from Glazers
2 days ago
Japan supporters clean up rubbish following famous win over Germany
2 days ago
ITV football pundit Nadia Nadim heartbroken as mother killed by a truck
Next Page