On Friday night, Patrick Bamford was using Twitter to blow off some steam. He was not the only one.

Ah, good. Just what we need, this. The weekend's barely started and here we are, jumping straight into some fresh VAR controversy. 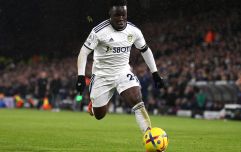 END_OF_DOCUMENT_TOKEN_TO_BE_REPLACED

Leeds United were on the wrong end of a 1-0 scoreline as they left Molineux on Friday night. Things could, however, have ended differently, after Patrick Bamford saw an equaliser ruled out for another laughably tight VAR call.

Having fallen behind to Wolves on the hour mark, it looked like Bamford had snatched an equaliser later on when he finished brilliantly after being put through on goal.

The linesman's flag instantly signalled that the 27-year-old had strayed offside before the pass was played, but VAR replays soon showed how close the call was.

VAR eventually ruled the linesman had been correct, though the pictures shown - which appear to indicate that Bamford's kneecap hair had been slightly ahead of Conor Coady's heel - were hardly conclusive. 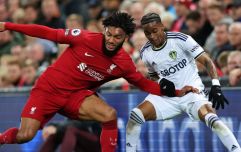 END_OF_DOCUMENT_TOKEN_TO_BE_REPLACED

Leeds were unable to find a goal after that, with Wolves holding on to clinch all three points.

Bamford made his feelings known about the decision after the game, tweeting that he believed his team had been "robbed of a point".

"Gutted for the lads tonight, robbed of a point, but at least it’s “mAkInG tHe GaMe BeTtEr”," he tweeted.

Gutted for the lads tonight, robbed of a point 🥴 but at least it’s “mAkInG tHe GaMe BeTtEr”🧐 we go again Tuesday #mot

The result saw Wolves climb above Leeds and into 11th in the table ahead of the rest of the weekend's Premier League fixtures.

Leeds will return to action when they host Southampton on Tuesday night.


popular
Sean Dyche set to be named Everton manager after Marcelo Bielsa talks break down
Roy Keane flatly rejects longstanding perception of ex-Man United midfielder Paul Ince
Allianz National Football League Round 1: All the action and talking points
Roy Keane leaves ITV pundits in stitches after Pep Guardiola's pre-match interview
Conor McGregor hit by car ‘at full speed’ while cycling
Quiz: Identify these 15 football clubs that are not named after a place
Study shows rugby positions you are most/least likely to be injured playing
You may also like
3 months ago
"What can they give us, and what can we give them?" - How Jack Charlton transformed Irish football
4 months ago
Why have some Premier League games been postponed this weekend?
4 months ago
Leeds United linked with shock transfer for John Egan
5 months ago
Leeds owner threatens 'global case' if Barcelona can't pay Raphinha transfer fee
6 months ago
Steven Gerrard defends John McGinn after tackle leaves 16-year-old Leeds player on stretcher
6 months ago
Raphinha sets Barcelona deadline to agree deal with Leeds
Next Page