Bamford was charged by the FA earlier this week

Leeds United will be without Partick Bamford for their next two games after the striker was suspended with immediate effect by the Football Association.

Bamford was charged with 'successful deception of a match official' earlier in the week, in relation to an incident with Aston Villa's Anwar El Ghazi during Sunday's 1-1 draw at Elland Road.

El Ghazi was sent off for allegedly elbowing Bamford in the aftermath of Leeds' opening goal. However, in announcing the Leeds' player's charge, the FA also announced El Ghazi's red card had been rescinded.

Marcelo Bielsa's Leeds side face a trip to Ipswich Town on Sunday before trying to secure promotion back to the Premier League for the first time in 15 years via the play-offs.

Their faint hopes of securing an automatic promotion spot ended with the draw to Villa, which confirmed Sheffield United's return to the top flight.

Bamford will miss the game with Ipswich at Portman Road and, more importantly, the first leg of Leeds' play-off semi-final. 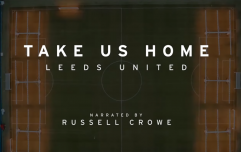 Leeds documentary drops tomorrow and the Bielsa story is compelling

END_OF_DOCUMENT_TOKEN_TO_BE_REPLACED

Leeds responded to the news of Bamford's suspension via a statement.

'The club felt that given the circumstances surrounding the incident, including the extraordinary act of sportsmanship which saw our head coach Marcelo Bielsa demand our team to allow Aston Villa to score an uncontested equaliser, we could have a sensible discussion around the sanction,' the statement read.

'We acknowledge that the FA panel did not feel that to be reasonable and the club therefore joins Patrick in accepting the two-match ban.'


popular
"If Murray is playing that first half for England, he's probably Man of the Match"
Jacob Stockdale and Johnny Sexton not spared by English press
'Were they up for it more than us? That's my responsibility' - Andy Farrell
Baz & Andrew's House Of Rugby - Twickenham carnage
Triple Crown wrenched away as England scrape Ireland off their boots
ROG hits the nail on the head assessing Ireland's performance
The Ireland XV that should definitely start against Italy
You may also like
8 months ago
PSG's Qatari owners reportedly holding talks with Leeds United over takeover
9 months ago
Frank Lampard racks up enormous bar bill after Derby County beat Leeds United
9 months ago
Bielsa concerned about financial situation before committing his future
9 months ago
Super Frankie Lampard absolutely lording it in the Derby dressing room
9 months ago
Frank Lampard made beeline for Richard Keogh after Derby's dramatic victory over Leeds
9 months ago
Frank Lampard responds to stop crying song from Leeds fans
Next Page