Of course, the Republic of Ireland would happily take a few Northern Ireland players if they were going.

If you ever find yourself in a murderous rage, for example, directly after when the Republic of Ireland threw away easy points against Georgia, a fun way to calm yourself down is to make a combined island of Ireland team.

Neither Northern Ireland or the Republic have perfect squads, but surely joining them together like the Ireland rugby team would result in a much-improved new team.

END_OF_DOCUMENT_TOKEN_TO_BE_REPLACED

To spare arguments and avoid bias, we're not going to make a 'United Ireland XI,' but if we did, there would be one player from the Green and White Army who would be a certainty to get in. We are, of course, referring to West Brom defender Jonny Evans. 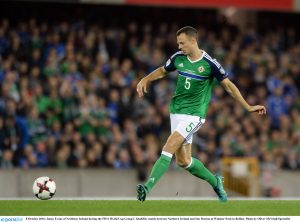 The question of which Northern Ireland player would get into Martin O'Neill's team was put to the SportsJOE Live, sponsored by Lottoland, panel on Tuesday and former Republic of Ireland international Stephen Elliott completely agreed with Ulster man Stephen Ferris' pick of Jonny Evans.

"Definitely. I played with Jonny when he was a young boy. He came on loan to Sunderland from Man Utd. You could see straight away that he was a class above."

"Even at a young age he was really cool on the ball, read the game so well, never got flustered. Even in match situations with experienced players up against him, he just got on it as if he was playing a youth team game and I'm not surprised to see him doing what he's doing now in his career."