Sheffield United forward Oli McBurnie has denied stamping on a pitch-invader after shocking footage emerged from Tuesday's Championship play-off semi-final. Police are investigating the incident, according to the BBC.

Paul Heckingbottom's side were beaten on penalties by Nottingham Forest in the second leg at the City Ground, with goalkeeper Brice Samba's spot-kick save from Morgan Gibbs-White leading to some unsavoury scenes as home fans invaded the pitch to celebrate the win.

McBurnie apperared to stamp on a pitch invader. 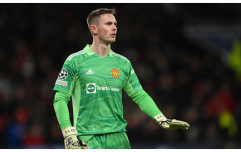 END_OF_DOCUMENT_TOKEN_TO_BE_REPLACED

Footage circulating on social media appeared to show injured United striker McBurnie jumping and stamping on a Forest fan in the midst of a melee on the pitch.

The shocking clip, which was posted on Twitter by user @brokenkingmusic, appears to capture the supporter in question falling to the floor before McBurnie comes in and stamps on him as he lays helpless on the ground.

The Scotland international was pulled away by one of his teammates and the Forest fan can be seen slowly getting to his feet towards the end of the clip.

Despite being accused of stamping on the fan, McBurnie has denied doing so and instead insinuated that he was trying to step over him on the ground.

A tweet was posted on Twitter which read: "Wish that @oli_mcburnie video was in full context - looks more like he was trying to step over him with one bad leg! Could be wrong!"

Wish that @oli_mcburnie video was in full context - looks more like he was trying to step over him with one bad leg! Could be wrong!

McBurnie replied to the post with a '100' emoji, indicating he agrees with that version of events.

Prior to the incident involving McBurnie, United striker and captain Billy Sharp was knocked to the ground by a pitch invader, which has led to the Forest fan in question being arrested.

Nottinghamshire Police said that a 31-year-old man had been arrested on suspicion of assault. He remains in custody and is to be questioned.

As reported by BBC Sport, the Football Association (FA) is investigating what occurred with the Scottish striker after the match. The police are also investigating.


popular
Eamon McGee just couldn't help himself with Armagh-melee tweet
How Man United would line-up if they land their big summer transfer targets
Robert Finnerty's strut up to the penalty spot was the stuff of legend
Strongest Ireland team to face New Zealand in Test opener, after squad set-back
Conor Gleeson's gesture to heartbroken Ethan Rafferty a tonic after sideline brawl
Ireland include plenty of new faces in team to face Maori All Blacks
Andros Townsend claims 'moaning' Jurgen Klopp has 'got his way again'
You may also like
1 month ago
Man jailed for headbutting Sheffield United captain Billy Sharp
1 month ago
Billy Sharp breaks silence after attack from Nottingham Forest fan during pitch invasion
1 month ago
Man arrested after Sheffield United's Billy Sharp attacked by Nottingham Forest fan
1 year ago
Sheffield Wednesday star issues explanation for 'celebrating' opponent's goal after angry fan reaction
1 year ago
"I was the monkey on his back, all the time" - How Clough handled Keane
4 days ago
Matt Le Tissier says he asked Sky Sports why they never sacked Jamie Carragher
Next Page