Ole Gunnar Solskjaer was over-heard bellowing instructions, in no uncertain terms, at Marcus Rashford to take on Arsenal defender Cedric Soares at The Emirates.

One of the main frustrations felt by United fans, during their mid-week loss to Sheffield United, was that United's attackers did not drive at the Blades' doughty defence.

Between Rashford, Anthony Martial and Mason Greenwood, United's front three could only muster one effort on goal against the league's bottom side. 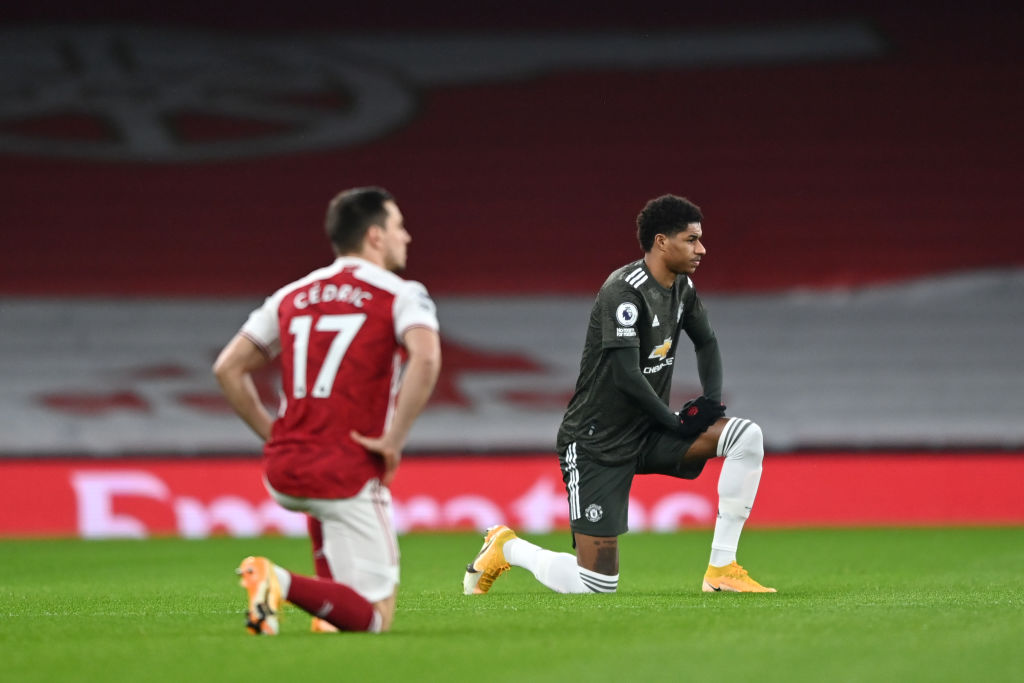 For today's game against the Gunners, Martial and Greenwood dropped to the bench while Edinson Cavani started up front with Rashford on the right of a front three and Paul Pogba on the left. The Uruguayan was one of five changes to the United XI that lost 2-1 to Chris Wilder's side.

Mid-way through the first half, Cedric was cautioned for catching Bruno Fernandes with a stray elbow as he went to head the ball. Not long after, Solskjaer came to the sideline and shouted at Rashford:

Solskjaer has just come to edge of technical area, pointed at edge of Arsenal's area and gone "Marcus, he cannot defend. He CANNOT defend. Take him on if you want."

Am sat closer to the pitch than usual and it sounded very much like Solskjaer said to Rashford "take him on if you want, he cannot defend" about Cedric.

END_OF_DOCUMENT_TOKEN_TO_BE_REPLACED

Whether that is because Cedric was on an early yellow card or if Solskjaer simply fancied his forward to get the better of the former Southampton defender is up for conjecture. Gabriel Martinelli, a former United triallist, was starting on the left wing for Arsenal so the instructions may well have been for Rashford to go hard up the right-hand side.

Cedric has probably heard worse in stadiums full of supporters. He surely never expected to get so publicly called out by the Manchester United boss for all the world to hear.

As for the game itself, Fred went closest for United in the first half as he drew a superb save from Bernd Leno. Arsenal's best chance fell to Nicolas Pepe, who cut inside and curled a low effort past the right-hand post of David De Gea.

Both sides spurned decent scoring chances after the break, with Arsenal hitting the crossbar with a free-kick and Cavani missing twice from inside of six yards. In the end, a scoreless draw and Cedric Soares proving he's not too shabby at defending.


popular
We knew Sean O'Brien wouldn't let us down with his Lions XV
Bill Shankly’s grandson asks for statue to be removed from Anfield
Sam Warburton backs Beirne and "phenomenal" van der Flier for Lions squad
'War-scene' in Tyrone dressing room before 2005 final sums up an iconic team
Keith Earls backed for Lions XV by one of the best in the game
'Make him hurt, make him yours' - How the Springboks ruled the world
The England stars in biggest danger of missing Lions Tour
You may also like
5 hours ago
“Remember what they’ve done to us” - Manchester United fans on another Glazer betrayal
9 hours ago
The humiliation of the arrogant Super League is a moment we should all savour
1 day ago
Gary Neville toasts the downfall of Super League after clubs back out
1 day ago
Ed Woodward leaving Man United as Super League implodes
1 day ago
Eric Cantona would like to say something about the European Super League
1 day ago
Everton slates the breakaway clubs over Super League 'abomination'
Next Page