4D transfer strategy from the team that brought you the Ander Herrera failed bid fiasco of 2013.

While most Manchester United fans, and their club's manager Ole Gunnar Solskjaer, were hoping transfer deadline day would see the likes of Sancho, Koulibaly, Dembele or Upamecano arrive at Old Trafford, Ed Woodward, Matt Judge and a crack team had other ideas.

END_OF_DOCUMENT_TOKEN_TO_BE_REPLACED

Chris Smalling was allowed to leave the club, leaving United with Harry Maguire, Victor Lindelof, Eric Bailly, Axel Tuanzebe, Teden Mengi and Phil Jones as their central defensive options. Cavani coming into the United attack, at least, gives Solskjaer the option of shifting about the existing front three of Martial, Rashford and Greenwood.

By the time deadline day arrived, United had come to accept that the Sancho deal was not going to happen. They had twice upped their initial €80m bid to what would have amounted to €108m [with add-ons and bonuses and an upfront €90m payment] but Dortmund were not budging. As far as they were concerned, United had spurned their Sancho chances by missing their stated cut-off point of August 10.

United were not finished with Dortmund, though. According to ESPN, they approached the Germans with a €1m bid to sign another of their players on the day the Premier League transfer window closed. 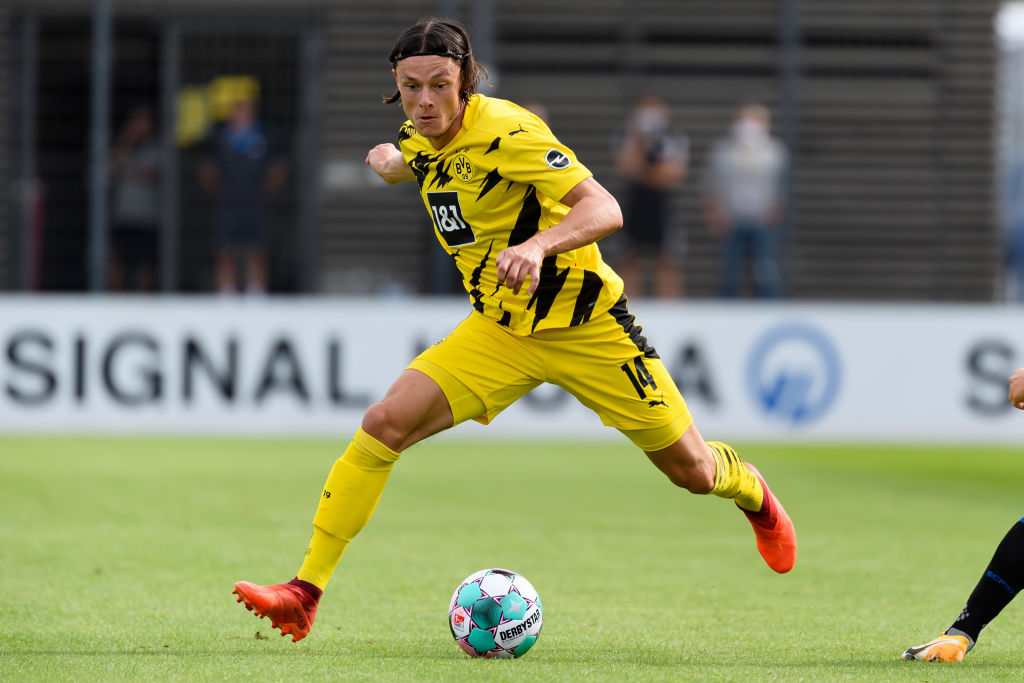 Nico Schulz controls the ball during a pre-season friendly between Borussia Dortmund and SC Paderborn in August. (Photo by Alex Gottschalk/DeFodi Images via Getty Images)

END_OF_DOCUMENT_TOKEN_TO_BE_REPLACED

United were in the middle of trying to tie up the deal with Telles and Porto were looking for €19m for the Brazilian. Woodward, Judge & Co. were holding firm at €15m and noting that Telles had just a year left on his contract.

In the meantime, possibly seeking a back-up should the Telles deal fall flat, United reportedly approached Dortmund and offered them €1m to get Schulz on loan for the season. United, kindly, offered to cover all of Schulz' wages too.

Dortmund had signed Schulz from Hoffenheim, for €25m, last summer but he had failed to force himself into the starting line-up [his last Bundesliga start for Dortmund was in December 2019]. Still, the Germans opted to hang onto Schulz, who won his 11th Germany cap during the week.

END_OF_DOCUMENT_TOKEN_TO_BE_REPLACED

One could forgive them for wanting to steer clear of United for a while.

In the end, United did just pay €15m for Telles but that fee could rise to €17m should the defender reach certain targets while in England.

Just another regular window for a club that has often exasperated their own fans, players and managers with their transfer tactics.


popular
Clive Woodward happy to 'eat humble pie' after bold comments about Ireland
Man United could be blocked from playing in the Champions League next season
Man City expect Pep Guardiola to leave
"He rode him like a machine rather than a racehorse" - Mullins doesn't spare Townend as second string come good
The Ireland team Andy Farrell needs to start when France come to town
Josh van der Flier's post-match recovery routine could spark a bracing trend
Matt Williams wants two changes and Peter O'Mahony benched for Ireland vs. France
You may also like
23 hours ago
Man United vs Leeds: Why the game won't be shown on Irish TV
2 days ago
Erik ten Hag draws up three-player transfer wishlist for summer window
3 days ago
Man United ponder appeal as new footage of Casemiro red card incident emerges
3 days ago
Man United squad don't want Mason Greenwood back in changing room
4 days ago
Alex Ferguson on how Owen Hargreaves was 'one of the most disappointing' signings he made for Man United
5 days ago
Juventus are reportedly ready to terminate Paul Pogba's contract
Next Page