I bet he wishes he had a student card.

When you're earning upwards of €150,000 a week, this is probably a drop in the ocean to you, but the sheer idea of spending this much money on hair is just ridiculous.

According to Spanish website Sport, the Barca forward is spending at least €2,000 a month on his do, despite the fact that he looks like he let a drunk toddler loose on him with some garden clippers.

His barber, Wagner Tenorio, said he couldn't put an exact figure on the cost of the work, but that it's never less than a couple of thousand euro.

“When Neymar first arrived [at Barcelona], his hair was in poor condition. He had made ​​too many changes, both hairstyles or colours, that left ​his hair in a poor condition.

“The first thing I did was to cut his hair, and begin processing. Today he has a silky hair. 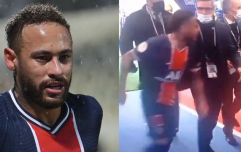 END_OF_DOCUMENT_TOKEN_TO_BE_REPLACED

“I do not have much time to work, but I am at his disposal. He sends a driver to pick me up and take me home. It is difficult to calculate the price [of the business relationship] because this service is not available to all, but I do not do it for less than 2000 euros a month.”

You can't take it with you, I suppose.

popular
"They're so far ahead of where I was at 18, it's just off the charts in terms of gym and fitness tests"
Damien Duff bides his time before roasting the FAI with 'motivational video' comment
"I don't know if the management know what their best 15 is" - Worrying times for Tyrone going into the championship
Ronaldo removes Coke, shows off the drink of champions in pre-match conference
Christian Eriksen's first words from hospital are a credit to the man
Can't imagine Rangers fans were happy about what Ronnie Whelan called Scotland
Euro 2020 Quiz: Group F
You may also like
4 months ago
Neymar hits back at Borussia Dortmund for taunting PSG after defeat
9 months ago
Carnage in Le Classique as Neymar accuses Alvaro Gonzalez of racism
1 year ago
Man United rejecting Neymar for Pogba swap the best business they've done all summer
2 years ago
Neymar gets nutmegged by 19-year-old in training, so instantly fouls the youngster
2 years ago
Vicente del Bosque blames Neymar for encouraging young players to dive
2 years ago
Neymar receives three match ban for hitting fan after PSG cup final defeat
Next Page