Lampard was sacked on Monday.

Everton's search for a new manager has already gotten off to a bad start after reports that two of their preferred candidates have already rejected the chance to take over.

Frank Lampard was sacked on Monday, leaving the Toffees in 19th and in yet another relegation dog-fight following their 2-0 defeat away at West Ham United on Saturday.

END_OF_DOCUMENT_TOKEN_TO_BE_REPLACED

The Toffees also confirmed that the 44-year-old's coaching staff would leave the club, with Paul Tait and Leighton Baines taking charge on a temporary basis.

With their next game the small matter of facing league leaders Arsenal on February 4, the Merseyside club are wanting to find Lampard's successor before the showdown at Goodison Park.

Owner Farhad Moshiri is already on the lookout, but according to The Times, Marcelo Bielsa - one of those favoured by the hierarchy - has turned down an approach.

Bielsa was believed to be Moshiri's number-one choice but the former Leeds United boss isn't interested in the role. 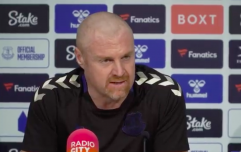 END_OF_DOCUMENT_TOKEN_TO_BE_REPLACED

Thomas Frank of Brentford is the supposed second manager to turn down a move to the North West according to Vital Everton.

Frank has been instrumental in Brentford's rise up the Premier League table and guided them to a 13th-placed finish last season.

His impressive work has continued as the talented coach has the Bees fighting for a European spot, sitting eighth in the table having beaten the likes of Manchester United and Liverpool at home this campaign.

On Monday Night Football, Jamie Carragher claimed that the Toffees were the 'worst run club in the country'.

END_OF_DOCUMENT_TOKEN_TO_BE_REPLACED

"Who knows a football club better than their own supporters? The supporters haven't got banners in the crowd for Frank Lampard, they have got them for the board.

"I said on this programme about 6-12 months ago - Everton are the worst-run club in the country - and it wasn't a flippant remark, I believed it.

"And I'm not saying that as an ex-Liverpool player, but as an ex-Everton fan. When I made that comment, Everton got in touch with me, and I actually admired it.

"They were on the front foot, trying to defend their club, and I thought okay fair enough, we say things in the media and sometimes people come back at you.