Newcastle are set to break their transfer record.

Newcastle are close to completing a deal for Real Sociedad striker Alexander Isak after a fee was agreed between the two clubs.

Isak, a Sweden international, will cost Newcastle £60m. He expected to finalise his move from Spain imminently, report The Athletic.

Should the move go through as expected, Isak will become Newcastle's new record signing ahead of Bruno Guimaraes, who joined the club from Lyon in January. 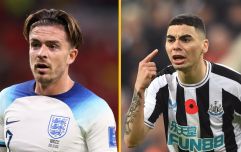 END_OF_DOCUMENT_TOKEN_TO_BE_REPLACED

The 22-year-old has spent three years with Real Sociedad, joining the Basque club from Borussia Dortmund in 2019.

He has scored 33 times for the club in 105 La Liga appearances, earning him a reputation as one of the continent's most exciting young strikers. 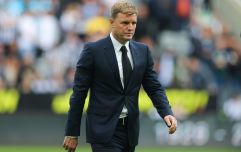 END_OF_DOCUMENT_TOKEN_TO_BE_REPLACED

He made his full international debut for Sweden in 2017 and has been capped 30 times, leading their attack at last summer's European championships.

Isak has been eyed by a host of clubs across the continent in the last year. Arsenal had been strongly linked with him prior to the arrival of Gabriel Jesus from Manchester City, whereas Liverpool have also been credited with interest.

Isak's arrival would continue the overhaul of Newcastle's squad since the takeover by a Saudi-backed consortium last year.

Chris Wood, Bruno Guimeires, Dan Burn and Keiran Trippier arrived on permanent deals in January, with Matt Targett arriving on loan from Aston Villa. Each played important roles in keeping the club afloat after they appeared set to be involved in a relegation scrap during the early part of the season.

Targett has since made his move permanent, with Newcastle also bringing in goalkeeper Nick Pope and Dutch international defender Sven Botman this summer.