They will be joining Major League Soccer in 2020.

MLS' newest team has been revealed for the first time as Nashville Soccer Club, after an unveiling ceremony at the city's Marathon Music Works.

It was announced in 2017 that Nashville would be getting an MLS team, a year after Nashville SC were formed.

The club has been playing its football in the United Soccer League (USL) since last year, and will enter MLS in a year's time.

"This is another big moment for us on the road to getting this all pulled together and getting to MLS," Nashville owner John Ingram said. "It's been a little over two years and there's been a lot we've gotten done and this is a big milestone."

In a statement, the club explained the reasoning behind the crest and the choice of colours, saying that it features "themes of sound and energy" -  a good choice for a city synonymous with music, and that the colours are "Acoustic Blue" and "Electric Gold". 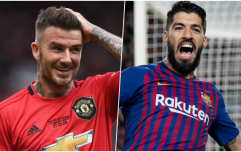 END_OF_DOCUMENT_TOKEN_TO_BE_REPLACED

"Gold is our primary club colour, and we need to own that colour in the sport," said Nashville SC CEO Ian Ayre, former chairman of Liverpool. "As we grow as a team, we want to be recognisable by our colour, our name and our values as a club.

"It was important to us that we started that by bringing the brand to life in a uniquely Nashville setting with our supporters, our partners, our owners, Major League Soccer and everyone who made this possible, and of course with music."

The club is one of a number of new teams to either join MLS or be confirmed as future teams in recent years. Since 2015 New York City, Orlando City, Atlanta United, Minnesota United and LAFC have all joined the league, with FC Cincinnati (2019), Nashville SC, Inter Miami (2020) and Austin FC (2021) set to join in the coming years.

popular
The SportsJOE 12 o'clock quiz | Day 186
How The Mountain lost 36kg ahead of boxing fight with The Beast
Only old-school fans will get 20/20 in this 1990s footballers quiz | Part 2
Sam Bennett's green jersey masterclass got Lance Armstrong talking
Rio Ferdinand story about Dwight Yorke conversation shows Alex Ferguson's ruthless streak
"He's found a way to do it. Whether that's good or bad for the game, I don't know"
Irish cyclist Sam Bennett delivers classic putdown to British cycling magazine
You may also like
1 year ago
Wayne Rooney sent off for abysmal tackle with DC United 3-0 down
1 year ago
Wayne Rooney smashes home hat-trick in 5-0 thumping for DC United
1 year ago
Robbie Keane paid tribute to David Beckham during LA Galaxy statue unveiling
1 year ago
Transition terrier and opposition torturer: Miguel Almiron can light up Rafa Benitez’s Newcastle
1 year ago
Wayne Rooney turned down private jets and hotel rooms at DC United 'to be part of the team'
1 year ago
Wayne Rooney scores best goal since move to keep D.C. United streak going
Next Page