Mount and Chilwell will miss the Czech Republic game

After talking to Chelsea teammate Gilmour after Sunday's match against Scotland, England players Mason Mount and Ben Chilwell are having to self isolate.

This will mean they miss the game against the Czech Republic, and Gilmour will miss the Scotland vs. Croatia match. A statement from England reads:

"We can confirm that Ben Chilwell and Mason Mount must isolate up to and including next Monday [28 June]. This decision has been taken in consultation with Public Health England. The pair were confirmed overnight as close contacts of Scotland’s Billy Gilmour after his positive COVID-19 test following last Friday’s match.

"Chilwell and Mount will isolate and train individually in private areas at England’s training base St. George’s Park, with the rest of the squad returning there after tonight’s fixture against Czech Republic at Wembley.

"We will continue to follow all COVID-19 protocols and the UEFA testing regime, while remaining in close contact with PHE.

"The entire England squad and staff had lateral flow tests on Monday and all were again negative, as was the case with Sunday’s UEFA pre-match PCR tests. Further tests will be carried out as and when appropriate."

"I can't say it isn't disruptive," said England manager Gareth Southgate. "You would have to say at this moment in time they are a big doubt for tomorrow," he told BBC Radio 5.

No Chillwell or Mount because they hugged their mate. Scotland team can play because no one saw them hug their mate. I can’t watch my daughter’s sports day but she can come home from school and give me a hug after playing with her friends all day. What a load of fucking bollocks. 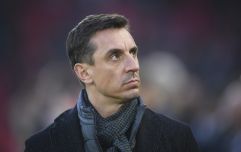 END_OF_DOCUMENT_TOKEN_TO_BE_REPLACED

A spokesperson from Public Health England has said: "PHE is working with the FA to identify close contacts of Billy Gilmour and any risk to other players and staff." It was then ruled that no one from the Scottish team would have to self isolate.

The guidance from PHE is as follows: someone that could be considered a close contact and might have to self-isolate if they had a face-to-face conversation within one metre, or had been within two metres of someone for more than 15 minutes who tested positive for Covid-19.

But because no one on the Scottish team came into close contact, they are free to continue with their match against Croatia.


popular
Get him a tuxedo, give him the All-Star and for crying out loud, someone bring that man out to America
Fans react to Tottenham Hotspur's 'brilliant tease' for Richarlison signing
Southampton pay tribute as Shane Long leaves the club after eight years
Tiernan Kelly and three other players hit with ban following tunnel brawl
Mohamed Salah signs new long-term contract with Liverpool
QUIZ: How well do you know Manchester United players of the 2000s?
Quiz: Name the players these famous footballers played alongside the most times
You may also like
1 week ago
Danny Care and Billy Vunipola make 36-man England squad for Australia
3 weeks ago
Ex-West Ham coach says Declan Rice shouldn't have been allowed switch allegiance
4 weeks ago
Jack Grealish hits back at critics after Premier League title celebrations
1 month ago
Jamie Vardy says 'Wayne Rooney is talking nonsense' about telling his wife to 'calm down'
1 month ago
Owen Farrell, Manu Tuilagi and 10 uncapped players in latest England squad
1 month ago
"I've probably watched every single Paul O'Connell speech" - Kyle Sinckler
Next Page