Ashley claims that Staveley broke a clause against criticising him

Former Newcastle United owner Mike Ashley is suing the club's new co-owners for breaking the conditions of a £10m loan he provided them to allow the sale of Newcastle to go through, which stipulated that they would not criticise him.

The Daily Mail have reported that the Sports Direct owner Ashley has claimed that Amanda Staveley, who owns a 10 per cent stake in the club, has defaulted the loan payment after breaking the condition as well as refusing to allow advertisement of his company to remain at St James' Park until the end of the season.

END_OF_DOCUMENT_TOKEN_TO_BE_REPLACED

Ashley's legal team have submitted documents at London's High Court which demand the return of £10m, plus interest, immediately which he states was given to Staveley in order to cover "advisory, legal and other costs and commissions," in return for sticking to the agreement.

Staveley's long-time partner, Mehrdad Ghodoussi, is also being sued as he is the Newcastle owner's guarantor in the deal.

A statement on behalf of Staveley and her partner Ghodoussi meanwhile has said that they are confident of defending the claim.

It said: "A company owned by Mike Ashley has issued proceedings against Amanda Staveley and Mehrdad Ghodoussi. The claim is connected to the acquisition of NUFC. 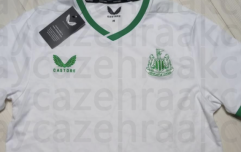 END_OF_DOCUMENT_TOKEN_TO_BE_REPLACED

"Ms Staveley and Mr Ghodoussi do not intend to comment on the details of the litigation, however they are very confident of successfully defending the claim in full.

"The litigation will not distract Ms Staveley or Mr Ghodoussi from their hard work at Newcastle United, particularly as they focus on the opportunities and deadlines presented by the January transfer window." 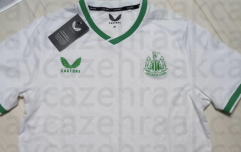 Newcastle United to wear Saudi colours on away kit next season

END_OF_DOCUMENT_TOKEN_TO_BE_REPLACED

Staveley was part of a deal with the controversial Saudi Public Investment Fund (PIF) who completed an 80 percent majority takeover worth £305m of Newcastle in October - subsequently making them the richest club in the world.

The 48-year-old was a key instigator in the negotiations and has a 10 per cent share in the Magpies, claiming that she used her "family's money" to help acquire the club.

However, the documents sent to the London High Court by Ashley question this, claiming that Staveley only secured her 10 per cent share in the club after being given a £30m loan from the Reuben brothers - who own the other 10 per cent of the club.

The agreement between the two states that Staveley was given two years to pay the loan back, while the documents presented show that Staveley has full knowledge that if the terms of the deal were broken, she would be required to pay the money back immediately.


popular
Roy Keane shows great comic timing after Jack Grealish party invite
Cutting through the contradictions from one of the worst television segments of the year
France the sore losers as Ireland Men reach first ever Sevens World Series final
Noel Gallagher left 'covered in blood' after headbutt from Ruben Dias’ dad
Kilkenny corner back does what every defender is supposed to do to win All-Ireland under-20
"I don't want to stick the knife in" - Are Leinster in Munster's heads?
Ralf Rangnick nicknamed 'specs' and subject to 'bully behaviour' at Man Utd
You may also like
2 weeks ago
Man United have reportedly named their price for Marcus Rashford
3 weeks ago
Jake Humphrey criticised for 'tone deaf' dig at Newcastle ownership critics
3 weeks ago
QUIZ: How well do you know the Newcastle United players of the 90s and 2000s?
1 month ago
Aston Villa and Newcastle eye up ambitious move for Paul Pogba
2 months ago
Six summer signings Newcastle United are likely to make
2 months ago
Frank Lampard shows broken hand suffered in last-minute winner celebrations
Next Page