"He's waiting for Roy over there, I've never seen Roy so nervous."

Micah Richards made a joke at Roy Keane's expense after Erling Haaland scored twice for Manchester City on his Premier League debut.

Keane and Haaland's father Alf Inge had several run-ins during their playing careers.

🗣 "He's waiting for Roy over there, I've never seen Roy so nervous." 🤣@MicahRichards winding Roy Keane up about his history with Alf Inge Haaland 👀 pic.twitter.com/cw12Rr48aD

"He's waiting for Roy over there," Richards said about Alf Inge Haaland, who was in attendance at the London Stadium for the game. "I've never seen Roy so nervous!"

END_OF_DOCUMENT_TOKEN_TO_BE_REPLACED

Keane took the jibe in good spirits, and joked, "I think he said to wait for me over there!"

In April 2001, Man United captain Keane was sent off after committing one of the most infamous fouls in Premier League history on then-Man City midfielder Alf Inge Haaland.

The pair previously had an on-pitch dispute when Keane suffered a serious knee injury against Leeds in 1997. 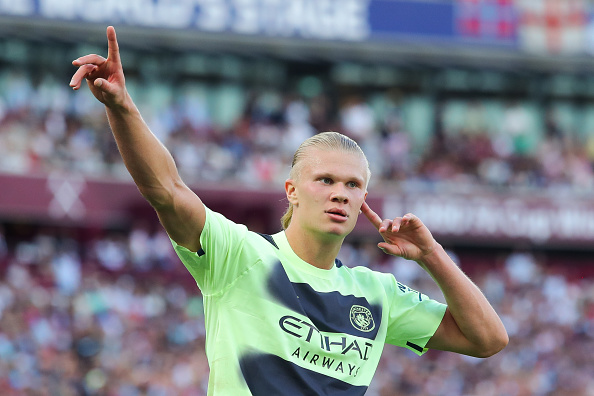 Keane, however, praised Erling Haaland for his performance against West Ham on Sunday.

"City’s passing and the way they wore West Ham down, who are no mugs. They toyed with them. But even when teams push up, Haaland will threaten in behind now.

"It’s going to be a different challenge for defenders now with Haaland running in behind. West Ham didn’t cope."

“He is like Ronaldo with his darting runs. He doesn't get too involved with the build-up but when it comes in the box he’s alive.”

“Haaland is like Ronaldo with his darting runs," Keane said.

"He doesn’t want to get too involved with the build-up but when it comes in the box he’s alive. In this City team, he’s capable of smashing records.”


popular
Peter O'Mahony riled by "petulant s**t" as Munster toasted by Dragons
GAA JOE Team of the weekend
Grim injury news for Seabelo Senatla after Bundee Aki's red card clear-out
Martin O'Neill doesn’t wait for a second invitation to settle an old score with Matt Doherty
55-year-old County Cork athlete beats Kaka in Berlin marathon to remember
James McClean's battle with John McGinn worth the attendance fee alone
Alan McNamee wins his 13th Offaly senior football medal as Jason McCarthy suffers nasty leg injury in Clare
You may also like
1 week ago
Why have some Premier League games been postponed this weekend?
1 week ago
Your guide to a great weekend of football and rugby and how to stream it all
2 weeks ago
English football could be postponed for a second weekend
2 weeks ago
Thomas Tuchel releases emotional statement after Chelsea sacking
2 weeks ago
Fears of fans disrespecting the Queen 'was a factor' in football postponement
2 weeks ago
Dublin could host Champions League games next week
Next Page