Memphis Depay has continued his sensational form for the dutch national team after scoring the second goal in Holland's Euro 2020 qualifier with Germany on Sunday night.

Ajax centre-back Mathijs de Ligt slipped on Sane's opener but made amends after half-time with a header to cut Germany's lead to a single goal before Depay then equalised after a nice lay-off from Gini Wijnaldum.

Exquisite! An outstanding team move from @KNVB as they move through the gears up the field before Memphis Depay dispatches a fine finish past Neuer!

A goal Cruyff would've been proud of in the stadium bearing his name! pic.twitter.com/VWgYBQWtPN 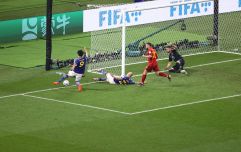 END_OF_DOCUMENT_TOKEN_TO_BE_REPLACED

Depay has had a relatively quiet season with Lyon with just six goals in 27 games during the campaign, compared to 19 goals in 36 games last season, but the former Manchester United winger has been outstanding for Holland with seven goals in his last eight international matches.

Depay, who moved to Lyon from United in 2017,  signed a four-and-a-half year deal with the French club, however, a clause in his contract allowed the Old Trafford club to install a buy-back clause upon his departure from Manchester.

Despite the option for United to take Depay back, the Dutch forward namechecked six European clubs he'd be happy to move to should he leave Lyon.

“Lyon is a big club, but not one of the five best in Europe. I want to go to a club like Real Madrid, Barcelona, Chelsea, Manchester City, Paris Saint-Germain or Bayern Munich," said in an interview with Helden magazine.

"I want to go to a city that suits me and a club that suits me, to a team that really wants to play football.

“I always talk about Real Madrid, a royal club, white shirts with gold. But I’m focused right now on Lyon, and then we’ll see where I end up.”

You may also like
2 months ago
"Do it! Do it!" - Roy Keane says Germany gesture "a start" but wants more protests
2 months ago
German FA considering legal action against FIFA over OneLove armband
2 months ago
Manuel Neuer reveals he has had skin cancer
3 months ago
Jamie Carragher couldn't resist texting Hamann after Klopp's comments
7 months ago
England fans arrested in Munich for Nazi salutes before Germany clash
1 year ago
Bundesliga side forced to deny rumour that manager peed on new American signing in initiation
Next Page