"The risk of infection is always there"

Juventus defender Matthijs De Ligt has revealed he has decided not to have a coronavirus vaccine, explaining that he believes people should be in charge of their bodies.

The 21-year-old defender, who joined Juve from Ajax two years ago, missed two games for his club after testing positive for the virus at the start of the year.

Speaking ahead of Euro 2020, where he will play for the Netherlands, he explained his reasons for opting against having the jab.

"I have not taken a vaccination, it is not mandatory," De Ligt told ESPN.nl.

"I think you should be in charge of your own body. The risk of infection is always there.

"I try to come into contact with as few people as possible outside the Dutch national team."

END_OF_DOCUMENT_TOKEN_TO_BE_REPLACED

De Ligt has joined up with his Dutch teammates ahead of the tournament next month and is believed to be one approximately six within the camp who have chosen not to have a vaccine.

Speaking in the week, his manager, Frank de Boer, said that he respected the decision of those who would not be having the vaccination.

"We have always said at KNVB [the Dutch FA] that the people who need the vaccine the most, should get it first," De Boer said at a press conference.

'That happened and now we think it could be a choice to vaccinate ourselves. In recent days, this was possible on a voluntary basis.

"I think about six players didn't do it. That's not a problem either, because you have to know for yourself if you have a shot.

"I said I would, but in the end it's the person's choice and we have to respect that." 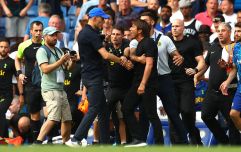 END_OF_DOCUMENT_TOKEN_TO_BE_REPLACED

Netherlands begin their tournament on June 13, playing Ukraine on home soil at the Amsterdam Arena.

News of De Ligt's decision comes days after Exeter Chiefs and England centre Henry Slade confirmed that he would not be getting a Covid-19 vaccine.

"From my own personal experience," he stated, via the Exeter Chiefs website, on Friday. "I have encountered issues in the past with the use of vaccines and I am continually wary around this area. That said, I have no hidden agenda against the current, nationwide roll-out of the Covid-19 vaccination programme."


popular
“Players flourished when Roy Keane left” - Rio Ferdinand on why Keane was a 'detriment' to Man United
The FootballJOE Pub Quiz: Week 50
Man United considering loan move for Christian Pulisic
Specsavers troll former Liverpool star for Darwin Nunez headbutt claim
"To be able to call myself the fastest man in Irish history is just amazing" - Olatunde overjoyed after record-breaking run
The moment Israel Olatunde realised he qualified for the Euro 100m final is what it's all about
"I went up to the Italians and gave them a big auld shoulder" - Paul O'Donovan does it again
You may also like
1 day ago
Man United now open to selling Cristiano Ronaldo this transfer window
1 day ago
Carragher and Neville brutally name Man United's biggest transfer flops since 2013
1 day ago
"There's a hole in the ceiling, about three-foot round" - Andy Townsend on life as Gazza's housemate
1 day ago
"Save it for the game!" - Owen Hargreaves on Man United fight before Champions League victory over Chelsea
2 days ago
Thomas Tuchel explains what sparked hand-shake scenes with Antonio Conte
2 days ago
Declan Rice apologises after Dean Henderson makes penalty save admission
Next Page