A statement stressed the move was a precautionary measure

Mason Mount and Ben Chilwell are isolating from the rest of the England squad after coming into contact with Chelsea teammate Billy Gilmour after the 0-0 draw with Scotland on Friday.

It was announced on Monday that Gilmour, who was named man of the match at Wembley, has since tested positive for Covid-19. 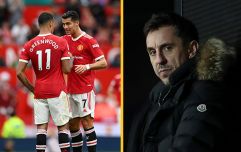 END_OF_DOCUMENT_TOKEN_TO_BE_REPLACED

Although England's players and coaching staff all returned negative test results on Sunday and Monday afternoon, a statement has confirmed that Mount and Chilwell are now isolating as a precautionary measure after consultation with Public Health England.

"The pair will be kept away from the rest of the England players and wider support team, pending further discussions with Public Health England," the statement explained.

"The entire squad has lateral flow tests on Monday afternoon and all were again negative, as was the case with Sunday's Uefa pre-match PCR tests.

"We will continue to follow all Covid-19 protocols and the Uefa testing regime, while remaining in close contact with Public Health England."

England are currently preparing for their final group game of Euro 2020 against the Czech Republic on Tuesday, where they will hope to confirm their place in the knockout rounds of the tournament.


popular
"I never really cried or got emotional over what I've done as an individual. I couldn't give a s***"
"If I break my wrist, it's on f***ing both of you." - Koepka and Berger act the spoiled child
"I was off the grid" - Aidan O'Shea respond's to Mayo criticism after club championship win
The FootballJOE Pub Quiz: Week 7
Dessie Farrell needs to make Paul Mannion return a top priority
Garry Ringrose raves about four young Leinster stars to watch this season
'I won The Open by six shots in my home country, but this was the best week of my golfing career'
You may also like
1 day ago
The FootballJOE Pub Quiz: Week 7
1 day ago
Alex Ferguson says Ronaldo's return was "like Caesar entering Rome"
1 day ago
Borussia Dortmund CEO issues explicit response to Erling Haaland transfer suggestion
1 day ago
Graeme Souness hammers 'non-existent' Spurs midfield after humiliating derby defeat
1 day ago
Kylian Mbappe caught on camera complaining about Neymar
2 days ago
Bruno Fernandes responds to late penalty miss and makes bold vow
Next Page