This is not the first time the club have been linked with the Austrian.

Manchester United expect a few more outgoings and incomings before the summer transfer window closes, at the end of this month. Not many of their supporters would have guessed Marko Arnautovic would be on their wish-list.

The club are looking to bulk up their striking options after the departure of Edinson Cavani, Mason Greenwood's suspension from footballing duties and the uncertainty around Cristiano Ronaldo. Anthony Martial was in good pre-season form but tweaked his hamstring and missed United's league-opening loss to Brighton.

END_OF_DOCUMENT_TOKEN_TO_BE_REPLACED

Arnautovic is currently with Bologna, in Serie A, after a season in China playing with Shanghai Port. The former Stoke and West Ham forward scored 15 goals in 33 Bologna games, last season.

It has been reported by The Guardian that United have made an enquiry with Bologna about the 33-year-old. As he has just a year left on his contract, Arnautovic could be available for around £10 million. This is not the first time United have considered bringing in the forward. 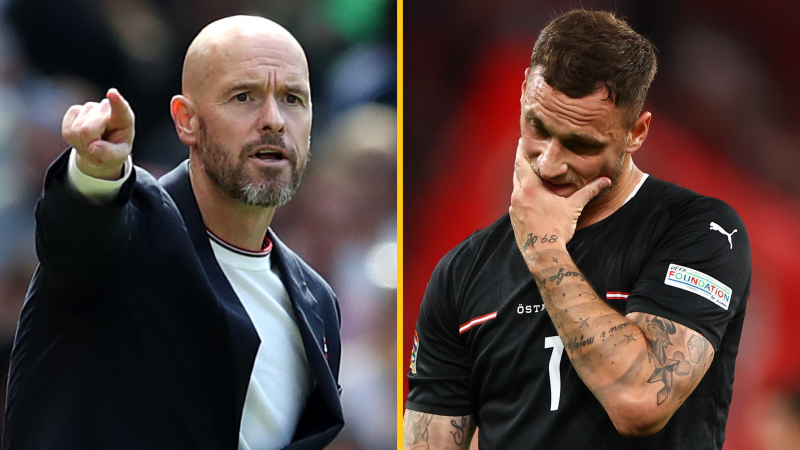 END_OF_DOCUMENT_TOKEN_TO_BE_REPLACED

Back in 2018, before the club sacked him, Jose Mourinho had Marko Arnautovic lined up for a move to Manchester United.

At the time, the Austrian was playing for west Ham, but the transfer never materialised as Mourinho was cut loose by United and replaced by Ole Gunnar Solskjaer. United then enjoyed an upturn in fortunes and went on a winning run that secured the Norwegian a permanent contract as manager.

Arnautovic was signed by Stoke from Werder Bremen in 2013. In his six Premier League seasons, with the Potters and West Ham, he scored 43 goals in 184 games. He has 33 goals in 103 games for his country and his best ever scoring return was last season's 15 goals for Bologna.

Asked about his team being linked with Arnautovic, ten Hag highlighted the lack of forward options in his current squad:

Ten Hag on Arnautovic reports: 'I don't go into names and I think in this pre-season 50 players are involved or linked with Man United, so that's it. We have two strikers, maybe a third one: Rashford.' #mufc

END_OF_DOCUMENT_TOKEN_TO_BE_REPLACED

Ahead of that league defeat to Brighton, United boss Erik ten Hag said the club was on the look-out for fresh faces, but would only bring in recruits if they were 'right players'.

"That would be a good situation," he said, when asked about more summer signings. "But I have a squad and I'm happy with the squad. The current squad, they make good progress.


popular
Sean Dyche set to be named Everton manager after Marcelo Bielsa talks break down
Roy Keane flatly rejects longstanding perception of ex-Man United midfielder Paul Ince
Allianz National Football League Round 1: All the action and talking points
Roy Keane leaves ITV pundits in stitches after Pep Guardiola's pre-match interview
Conor McGregor hit by car ‘at full speed’ while cycling
Quiz: Identify these 15 football clubs that are not named after a place
"I don't like to fill my time that way" - O'Hora going his own way in an era of obsessives and covering all bases
You may also like
4 days ago
Troy Deeney says Harry Maguire's agent contacted him after comments about the player
4 days ago
Cristiano Ronaldo told Jorge Mendes they were 'done' if he failed to find big transfer
5 days ago
Quiz: Name the Argentina players to have scored for Man United in the Premier League
5 days ago
Roy Keane gives his verdict on Mikel Arteta's touchline behaviour
5 days ago
Arsenal fans arrested in Uganda for celebrating Man United win
5 days ago
Roy Keane's threat to Cesc Fabregas about 'pizza incident' has panel in stitches
Next Page