Everyone knows that the Bayern Munich stopper loves nothing more than getting involved and sometimes that does involve heading the ball away from outside his area or dribbling the ball into midfield or, at some mental times, taking bloody throw-ins.

We can all remember our favourite Neuer moment but the stats revealed on Bayern's official Facebook page this morning show how very fond the German is of playing sweeper. 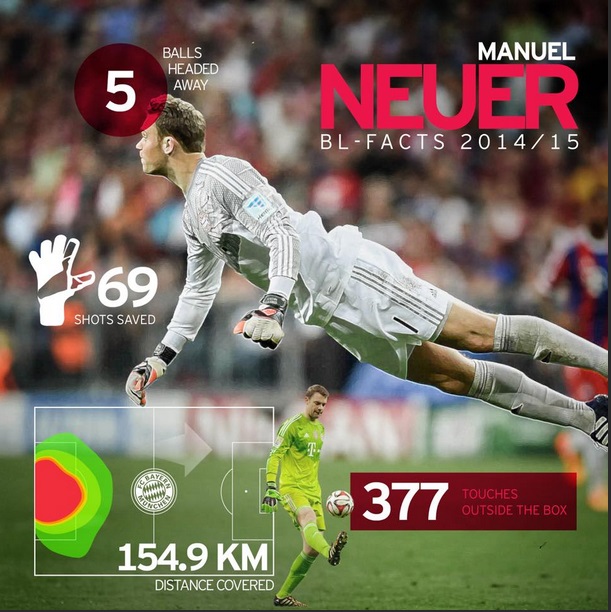 Neuer took a ludicrous 377 touches outside his area throughout the Bundesliga season which means, on average, he takes the ball outside the box over 11 times a game.

He's also covered a whopping 154.9 km over the season which has to be a world record for a goalkeeper with the obvious exception of those crazy teams who allow their 'keeper take direct free kicks.


popular
The SportsJOE 12 o'clock quiz | Day 117
QUIZ: See if you can identify these retro football kit sponsors
Diarmuid Connolly's Boston heroics captured in stunning, evocative video
SportsJOE 2000s Football Quiz | Round 10
Clubs set for ticket mayhem with no more than 50 supporters per club
The SportsJOE 12 o'clock quiz | Day 116
"I saw this old, fat bloke with a bald head and I thought Besty was behind him"
You may also like
1 year ago
Bayern Munich, in their kindness, are letting Mats Hummels go back to Dortmund
1 year ago
Leicester City installed as favourites to sign Arjen Robben
1 year ago
Rio Ferdinand has perfect answer to question about Virgil Van Dijk
1 year ago
Bayern Munich charged over shirt worn in 3-1 Liverpool defeat
1 year ago
Player ratings as Liverpool record comfortable victory over Bayern Munich
1 year ago
Liverpool fan shows basic misunderstanding of away goals rule in radio call
Next Page