Since Ole Gunnar Solskjaer took the reins at Manchester United, most of the squad have shown signs of improvement. They're more expressive, more proactive in retrieving the ball, and more confident on it. Certain players have not improved quite as much as many would have hoped, though. Alexis Sánchez's move to United is resembling Fernando Torres' move to Chelsea with every touch of the ball. And Romelu Lukaku has lost his place in the starting XI.

Lukaku will get more chances in the next few weeks due to injuries, but he has found himself demoted to the bench, as Solskjaer favours Marcus Rashford playing through the middle. 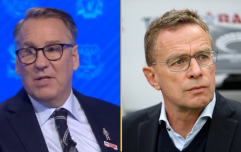 END_OF_DOCUMENT_TOKEN_TO_BE_REPLACED

And the Belgian could be on his way out of Old Trafford this summer, if reports that United have begun talks with Juventus over a possible swap deal are to be believed.

The Mirror are reporting that United have already begun talks with two Italian clubs - Inter and Juventus - over a possible transfer.

Any deal with either club would see United get Paulo Dybala from Juve or Mauro Icardi from Inter, according to their report.

Dybala has found himself playing second fiddle to Cristiano Ronaldo this season, and occasionally not even featuring from the bench, which has sparked rumours that the Argentine forward could push for a move.

Icardi, meanwhile, was recently stripped of the Inter captaincy before he refused to travel to Austria for Inter's Europa League tie against Rapid Wien.

The fallout comes amid a contract dispute, which has opened up the possibility that Icardi could leave the club, despite turning down moves in the past to stay at Inter, purely out of love for the club and the city.

Icardi would come with some baggage but his goal record speaks for itself - he has scored 122 goals in 210 matches for Inter.