When it rains it pours.

Manchester United will be without Anthony Martial and Eric Bailly for their clash with Fulham at Old Trafford on Saturday afternoon. Martial was taken off during Arsenal during United's midweek game against Arsenal which ended 2-2, while Bailly played through it despite carrying a knock.

The pair did not arrive at the Lowry hotel with the rest of the matchday squad ahead of their match against Fulham.

José Mourinho said afterwards that Martial did not feel it was an injury, but a "pre-injury".

"He doesn't think it is an injury, he thinks it's a pre-injury, he was feeling tight," Mourinho said. 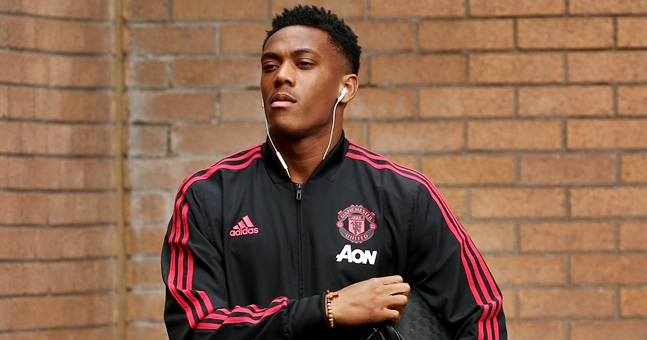 Mourinho suggested in his pre-match press conference that Chris Smalling and Phil Jones may also miss out, but the iconic defensive duo made it through Friday's training session unscathed and have been passed fit to face Fulham.

END_OF_DOCUMENT_TOKEN_TO_BE_REPLACED

Summer signing Fred has been included in the provisional squad after he was excluded from the team against Arsenal.

The Brazilian has started only six league games and not featured in the last four but Mourinho has clarified that his exclusion is a consequence of the team's defensive instability.

"Step by step, you have also other players in other clubs that needed their time and you have some of them that played even less than what Fred is playing," Mourinho said.

"I think Fred, when the team is defensively stronger and doesn't need in midfield people that is more worried in giving balance to the team than being involved in creation and attacking dynamic, the day we are stronger defensively, I think the horizons for Fred change completely."

Ahead of United's home match against Fulham, who have conceded 31 goals this season, Mourinho said: "I want to be positive and think we are going to win."

END_OF_DOCUMENT_TOKEN_TO_BE_REPLACED

"I repeat the position: The points sometimes don't say much about the real potential of the team. So one of the two most important managers in the history of the Premier League, so they have the potential to come here tomorrow and to give us a very difficult match."


popular
Man United could be blocked from playing in the Champions League next season
Ireland team vs. France: Form players rewarded and a welcome return
French media's opinion of this Ireland team becomes clear as vital clash nears
Lionel Messi makes decision on Barcelona return
Clive Woodward happy to 'eat humble pie' after bold comments about Ireland
"I should have been more mature" - O'Sullivan's injury trail a cautionary tale for Sigerson casualties
Man City expect Pep Guardiola to leave
You may also like
1 day ago
Casemiro explains why his name has been spelt wrong his whole career
1 day ago
Man United vs Leeds: Why the game won't be shown on Irish TV
3 days ago
Erik ten Hag draws up three-player transfer wishlist for summer window
3 days ago
Man United ponder appeal as new footage of Casemiro red card incident emerges
3 days ago
Man United squad don't want Mason Greenwood back in changing room
5 days ago
Alex Ferguson on how Owen Hargreaves was 'one of the most disappointing' signings he made for Man United
Next Page