Issa Diop cost West Ham £22 million last summer. If they are to let him leave, 12 months on, West Ham want twice that and Anthony Martial thrown in too.

We all know the English transfer market is grossly inflated, these days, but this is getting out of hand. Just about every player, bar Phil Jones and a few other Manchester United defenders, has astronomical transfer fees attached.

When United sources, close to Ed Woodward, stated last summer that the club was willing to pay £100m to land a top defender, they surely did not have pickings from Leicester, Crystal Palace and West Ham in mind.

Manchester United are interested in Harry Maguire, Aaron Wan-Bissaka and Issa Diop as they try to revamp a defensive unit that leaked goals. If reports in recent days are accurate, United would have to pay £210m to get the trio.

Diop 'has been on United's radar', according to Sky Sports, since his towering performance in a 3-1 West Ham win over them back in September. Kalidou Koulibaly was United's top defensive target but Napoli are holding out for £90m to part ways with him, so United are considering Diop. 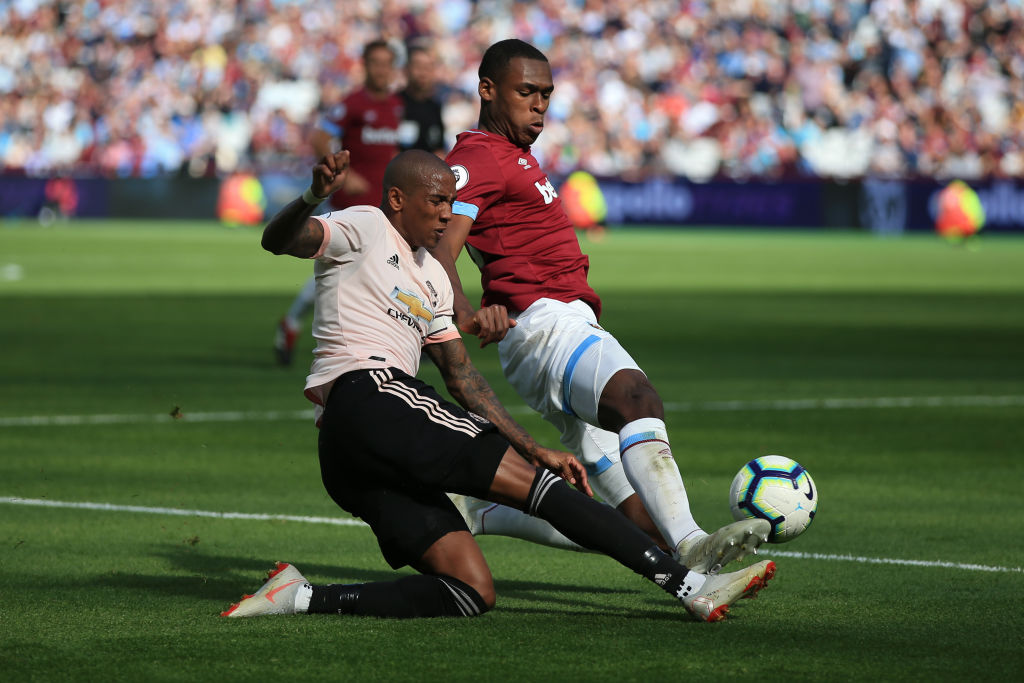 Ashley Young is tackled by Issa Diop of West Ham during a Premier League clash in September 2018. (Photo by Marc Atkins/Getty Images)

Their musings may have just been blown out of the water, though.

United were said to have made a bid of £40m for the 22-year-old central defender but West Ham swatted that one away. They countered by telling United they would take that £40, thanks very much, but wanted Anthony Martial thrown is as a sweetener.

On the urging of Manuel Pellegrini, West Ham reached out to United last season about the availability of Martial on either a loan or permanent deal. They were not fussy. United rejected those advances but now, in Diop, the Hammers have someone they want.

END_OF_DOCUMENT_TOKEN_TO_BE_REPLACED

Then comes the stroke of genius that has Ed Woodward stamped all over it. United have reportedly countered with a cash plus Phil Jones deal.

For many United fans, Jones has not become the Duncan Edwards-style talisman that Alex Ferguson prophesied soon after his 2011 capture from Blackburn. Six months after Jones arrived at the club, the legendary Wilf McGuinness commented:

"There is no question about that and I certainly think Phil Jones is going to be a player in the mould of Keane, Robson and Ince for United."

Eight years on and those comments now leap out at you. Jones the midfielder never really panned out and though more comfortable as centre-back, he is liable to make a handful of high-profile mistakes each season.

The idea of bringing in Diop and offloading Jones - albeit one of the club's last remaining league winners - will appeal to most.

It remains to be seen whether United countering West Ham's very own counter-offer with Phil Jones will put a full-stop on this transaction. But you have to admire both sides for their brass necks.


popular
The SportsJOE 12 o'clock quiz | Day 134
"It's not about winning at underage. It's about building players and building people"
"Me and him used to room together, and he was a bit of a nightmare"
Excitement in Mitchelstown as Cork man set for AFL debut at 20
The SportsJOE 12 o'clock quiz | Day 133
A starting XI of the best free agents available this summer transfer window
PIC: Rugby league star deletes Twitter after scorned girlfriend posts infidelity photo
You may also like
1 week ago
'Cristiano Ronaldo broke David De Gea back in 2018'
2 weeks ago
Victor Lindelof is 90% perfect, but it's the rest that kills you
4 weeks ago
"Luis Suarez made a big mistake and we, as a club, got it wrong" - Jamie Carragher
1 month ago
'Pogba seems to really appreciate having someone in there who's taking the limelight'
1 month ago
Uncomfortable truth about Roy Keane swipes at De Gea and Maguire
1 month ago
'I never liked Eric Cantona... but he was my favourite player' - Neil Ruddock
Next Page