United's pursuit of Camavinga is said to be "progressing"

With Jadon Sancho's transfer to United imminent (no, really this time) and a move for Raphael Varane also thought to be high up their list of priorities, the news that a move for Camavinga was also on the agenda at Old Trafford seemed a bit of a stretch when it first surfaced last week. 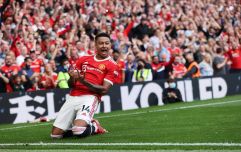 END_OF_DOCUMENT_TOKEN_TO_BE_REPLACED

The speculation, though, is not going away, with Fabrizio Romano now claiming United are "progressing" on a potential deal having opened direct contact with the 18-year-old's representatives.

Romano adds that Rennes would be open to negotiating a deal of around £26m for the midfielder, who, despite his age, has already earned three caps for the French national side.

Camavinga has just a year remaining on his current deal with the Ligue 1 side, who would prefer to receive a fee than risking him leaving for nothing in 12 months.

Paris Saint-Germain have also been heavily linked with a move for the player, who was thought to have expressed an interest to remain in his homeland to continue his development. But United, who are said to have held a long-term interest in him, could be about to change his mind.

Sancho, who made his first start of Euro 2020 against Ukraine on Saturday, is expected to complete his move to United after the tournament after a fee was finally agreed with Borussia Dortmund.

With Varane, it has been reported that United are front of the queue for the defender, who is said to have indicated a willingness to make the move to Old Trafford. The stumbling block in that deal could be United's reluctance to pay over the odds for a player who, as is the case with Camavinga, is entering the final year of their contract.


popular
Alex Ferguson wrote Mickey Harte a letter - ex Tyrone boss reveals in new memoir
"There are clubs in every county that you just know - they like fighting." - Fighting passes on through the generations
"I'll go back running the roads now and make sure my body doesn't get lazy"
GAA at its best as Bellaghy players run into team-mate who buried his father that morning
“How it finished was not the way I would have chosen" - Mickey Harte reveals how his time with Tyrone came to an end
New footage shows exactly what Deontay Wilder said to Tyson Fury after trilogy fight
Somehow Pat Spillane's 1981 cruciate rehab routine hasn't survived the test of time
You may also like
14 hours ago
Alex Ferguson wrote Mickey Harte a letter - ex Tyrone boss reveals in new memoir
4 days ago
Marcus Rashford says he is 'in a much better place physically and mentally'
4 days ago
Paul Ince accuses Solskjaer of 'blatantly lying' to Donny van de Beek
5 days ago
Newcastle United planning to raid Man United's squad for four players in January window
6 days ago
Marcos Rojo given lengthy ban for his part in Boca Juniors' tunnel brawl
1 week ago
Ole Gunnar Solskjaer has 'five unhappy' players at Man United
Next Page