It looks set to be the transfer saga of the summer.

Manchester City have made a huge offer of £100 million plus the possibility of a player to Tottenham, in a bid to lure Harry Kane away from the club.

However it seems like Spurs owner Daniel Levy is standing firm in his desire to keep the star man at the club as they try to rebuild for the upcoming season. 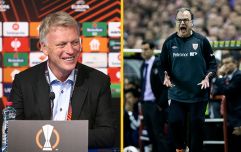 END_OF_DOCUMENT_TOKEN_TO_BE_REPLACED

There have been rumours for weeks now about Kane's desire to leave the club, and Tottenham really appear to be in a state of turmoil as their endless search for a permanent manager goes on.

The news of City's offer was shared by Fabrizio Romano, with the transfer news extraordinaire writing: 'Manchester City made an official proposal to Tottenham for Harry Kane. £100m guaranteed and availability to include players in the deal...

'Tottenham have NO intention to accept. Harry wants to go, but Levy will try to keep him. Harry now focused on the Euros, then it’ll be decided."

Manchester City made an official proposal to Tottenham for Harry Kane. £100M guaranteed + availability to include players in the deal.#THFC have NO intention to accept. Harry wants to go, but Levy will try to keep him. ❌

Harry now focused on the Euros, then it’ll be decided.

For the sake of the league though, we surely have to all be hoping this doesn't happen. It's difficult to see how anyone would get close to challenging City for the title if Kane decided to make the move to the Etihad.

It's difficult to overstate how much of an asset Kane is to Spurs in both a footballing and commercial sense. If there is one person this won't be lost on, it's Daniel Levy. If he doesn't want to sell he won't, and it's difficult to see Kane getting to the point where he would refuse to play for the club that he loves.

It's all up to Daniel now. Clubs like City have got the money, Kane sounds like he wants to leave. It's simply a case of whether Levy decides to let his beloved Harry go.


popular
"I never really cried or got emotional over what I've done as an individual. I couldn't give a s***"
"I was off the grid" - Aidan O'Shea respond's to Mayo criticism after club championship win
"If I break my wrist, it's on f***ing both of you." - Koepka and Berger act the spoiled child
'I won The Open by six shots in my home country, but this was the best week of my golfing career'
The FootballJOE Pub Quiz: Week 7
"I told him the absolute truth" - Sergio Garcia on his Ryder Cup talk with Rory McIlroy
Final Ryder Cup player ratings a tough read for some Team Europe big guns
You may also like
6 days ago
Cristiano Ronaldo reportedly rejected by Atletico before sealing Man United return
1 week ago
Pep Guardiola's defence of his tone deaf comments is a bizarre hill to die on
1 week ago
Pep Guardiola refuses to apologise to Man City fans after attendance plea
1 week ago
Man City fans hit out at Pep Guardiola after attendance appeal
1 week ago
Pep Guardiola calls for more Man City fans to attend Southampton match as empty seats add up
2 weeks ago
Benjamin Mendy to appear in court on Friday to set date of trial
Next Page