'He's a really good lad and he deserves it, so I just want to say, for Phil Jones, keep going.'

Luke Shaw was keen to praise Phil Jones after the defender returned to the Manchester United starting line-up for the first time in over two years.

Man United suffered a disappointing 1-0 defeat at home to Wolves on Monday night, with João Moutinho stroking his shot past David de Gea in the 82nd minute to secure a memorable victory at Old Trafford.

With a number of centre-backs out injured - including club captain Harry Maguire - interim boss Ralf Rangnick opted to start Jones, who had impressed United's new boss in training. 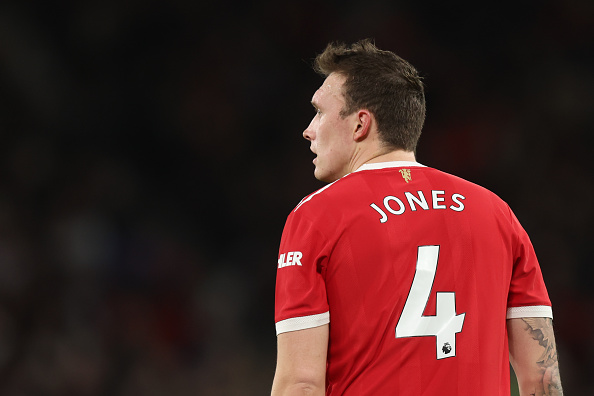 The 29-year-old enjoyed a decent return to first-team football against Wolves, and fellow defender Shaw was quick to praise him for overcoming criticism in recent years.

END_OF_DOCUMENT_TOKEN_TO_BE_REPLACED

Speaking to Sky Sports after the game, the England left-back said: "Phil Jones should be proud of himself, he's been criticised for a number of years, constantly, people always getting at him but he's stuck by it, he's so professional, trained so hard and he got his chance tonight, and I think he was phenomenal.

"He needs a lot of respect for that tonight because he was out for over a year and this is really his first big game back and he was exceptional, I'm very happy for him for what he's been through.

"He's a really good lad and he deserves it, so I just want to say, for Phil Jones, keep going."

🗣 "He was phenomenal, he needs a lot of respect for that tonight."

Luke Shaw praises his teammate Phil Jones for his comeback in the Manchester United squad pic.twitter.com/Z9VsHomWh8

END_OF_DOCUMENT_TOKEN_TO_BE_REPLACED

Shaw was extremely critical of United's performance against Bruno Lage's side, questioning the togetherness of the Red Devils squad.

He added: "Us players we've been here for a long time, we've played at home, we know what it's like when we have the intensity and you can feel the motivation is there. But I think tonight we didn't show that we were all there together, we felt like we were struggling."